There’s nothing better than going out on a long summer hack with your friends, but it can be worrying if your pony misbehaves. We problem-bust some common issues 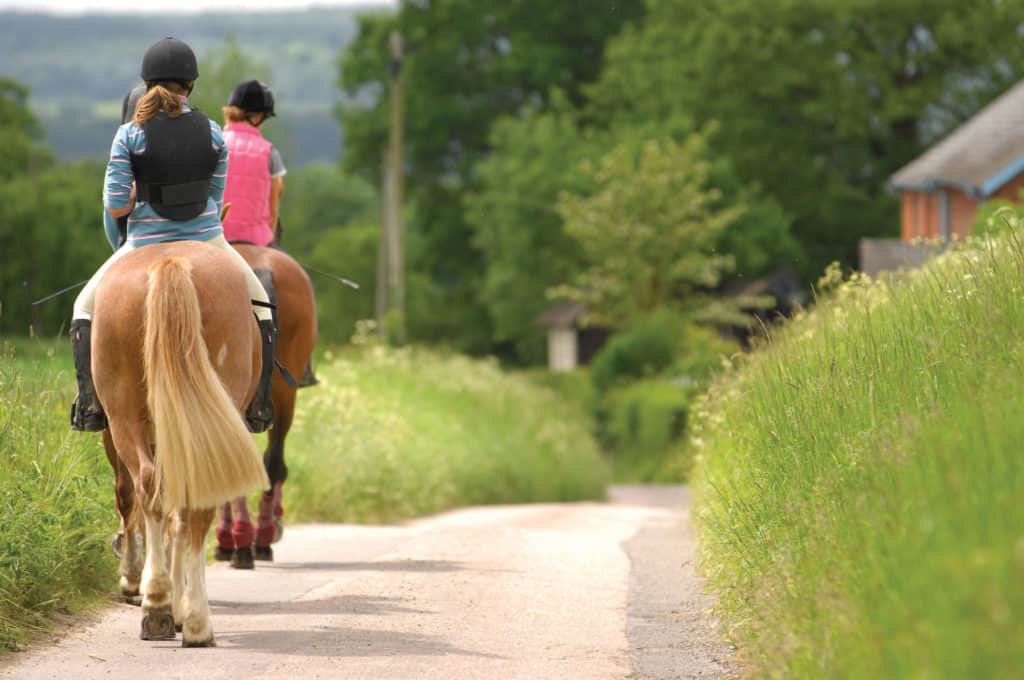 It’s natural for your pony to spook if he sees something unexpected, so it’s important not to get cross with him if he does! Telling your pony off for spooking will only make him more nervous, creating a stressful situation for both of you.

If your pony spooks at something, let him stop and have a look at it. Once he realises it’s nothing to worry about, he’ll normally be happy to walk past. He might even want to give it a sniff to investigate and that’s okay, too! Give him a pat to praise him once he’s gone past.

If your pony still doesn’t want to walk past something once he’s had a look, ask a more confident rider and pony to give you a lead. Remember to wrap your legs firmly around his sides and keep your hands soft to give him confidence to walk on.

Top tip – Remember, the more hacking you do, the more your fave pony will see. He’ll become more confident in his surroundings, making him less likely to spook!

Not wanting to take the lead

Is your pony super-confident when he’s following on from his pony friends, but not so much when he’s in front? Ponies are herd animals and they can feel more vulnerable if they’re taking the lead.

You need to make sure your pony has confidence and trust in you to be able to take the lead. If he thinks you’re worried as well, he won’t want to go in front in case there really is a problem!

Build up by walking alongside another pony out hacking, rather than following on behind. Once your pony is happy with this, push him on so his head and shoulders are ahead of the other pony, before eventually asking him to go ahead completely.

Hacking with friends can be very exciting for some ponies, which means they can be stronger than usual. If your pony is strong when you’re hacking, make sure he listens to your aids in the school first. Use half-halts to keep him listening to you and waiting, rather than constantly pulling. If you keep a short, tight hold on his mouth, he’ll only pull back harder – ponies are much stronger than us!

Try to think about why your pony is being strong – maybe he’s not getting enough exercise or is being fed too much? Cut back any hard feed he doesn’t need and try to keep him turned out for as long as possible. He’ll use up more energy in the field than stood still in a stable all day.

Top tip – Lunge or ride your pony in the school before you take him hacking if you’re worried he might get excited. That way, he can use up some of his energy before you head out into the open.

Some ponies are just soooo relaxed about going hacking that they can be lazy and not listen to your leg. This can be frustrating, especially if it seems you’re kicking all the time!

Remember, though, just like if your mum constantly tells you to tidy your room, you don’t feel like doing it – it’s the same for ponies! The more you keep nagging with your legs, the more he’ll ignore you. Give him a squeeze and, if he doesn’t respond, a tap with your whip to back up your leg aid.

Another way to keep a lazy pony motivated is by keeping his work varied. If you only ever hack out on the same route, he might get bored and switch off. Make it more exciting for him by mixing up where you go, and trotting and cantering in different places. You can also try swapping round the order of ponies – you might find yours is more forward-going at the front, rather than falling asleep behind his friends.