As we reported in October PONY Magazine, Duggie and Soloman’s friend Colonel was sadly put down following illness. Here we present a tribute to our favourite mini Shetland, written by the person who knew him best, Kate. He’ll be missed not only by the boys, but by everyone at PONY Magazine. 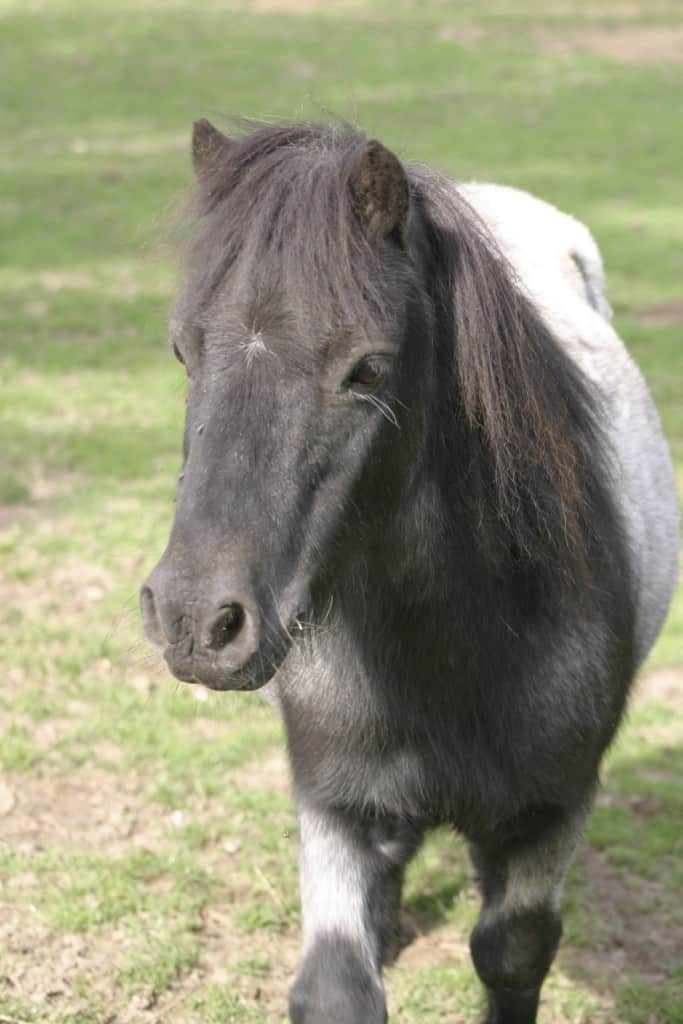 On July 18th I said a final goodbye to my special friend, Colonel. Officially, I was his owner since 1994, but I never thought of myself as his owner; he was a loyal, funny, plucky companion and friend for all those years, from whom I learned much, and who I feel honoured to have shared so much of my life with.

My first two weeks with Colonel were deeply distressing. His previous owners hadn’t handled him, so he was almost feral. He suffered badly from the effects of sweet itch, and his body consisted of numerous open sores, where he had scratched himself in dire attempts to get away from the agony of being so itchy. He had no tail – he had scratched it away – and the top of the tail bone and his rump were raw and bloody. His mane consisted of wisps of hair; where his mane should have been was rubbed raw. It was a terrible sight, but what made it more terrible from my perspective was that he was semi-wild, and wouldn’t allow anyone to get close to him – so I couldn’t catch him and help ease the itching with the soothing lotions and creams I knew would help. He paced the field like a demented animal, agonising in his suffering. I was desperate to help.

The first lesson he taught me was to be patient. Each day, I spent time in his field, bringing in small amounts of tasty feed to tempt him to come closer to me. Little by little, it worked, though getting a headcollar near him remained a challenge. After two weeks, I was able to crouch beside him, headcollar in my hand, and eventually he allowed me to put it on him.

My patience had been rewarded, and I started to slather him with ointments to help soothe the sores, and then other creams to ease the sweet itch. Within a week, you could see a difference, and the sores started to heal. Skin began to grow back, and, though it took many months, Colonel’s mane and tail began to grow back. After a few years, they were both bushy and long!! After that terrible early experience, his sweet itch remained under control.

And something beautiful happened: as Colonel emerged from the pain of his suffering, he turned to me as his human friend who had helped him. From then on, we shared a unique and special bond, and developed an understanding of each other that was almost telepathic.

Over the years, he continued to teach me about life. If he didn’t want to do something, you couldn’t force him. Instead, you had to find a way of persuading him that it was best for him and that he actually wanted to do it. Vets and farriers shook their heads in disbelief at his antics, as he would make it very clear if he didn’t want his teeth rasped, or his feet trimmed. He’d rear, he’d jump, he’d pull away – and everyone was stunned that a pint-sized pony had so much strength and even more character! But they always admired him for his pluckiness, and laughed at his cheeky grin. Whatever he did, you just couldn’t get cross with him!

When he came into my life, he had suffered badly from laminitis, and for the 21 years we were together, I had to manage his care carefully to try to prevent laminitic attacks which we knew would be extremely painful. Sadly, there were occasional flare-ups, and I am forever grateful to Bruce Middleton (his vet) and Marc Taylor (his farrier) for their advice and care.

Surprisingly, it wasn’t laminitis that caused his death. On the morning of July 18th, he was lying down, didn’t want to eat and had mucous coming out of his nostrils. The vet diagnosed choke – a blockage in his oesophagus – and an endoscopy showed this to be the case. It proved to be impossible to dislodge. I briefly discussed and considered the option of hospitalising Colonel, which may have entailed surgery, but my instinct was that my dear friend was old (he was 32), not in the best of health due to being laminitic and, by now, suffering from Cushing’s Disease. I knew, deep down, that this was his time to go. I asked the vet to put him to sleep.

With tears in my eyes, I wrapped my arms gently around him, and shared a few quiet moments on my own with him. He died very peacefully and quickly.

I will miss our little chats in the field each day, and the way he used to gallop, at full speed, towards me, whinnying with excitement at the food in the bucket I held for him. It is really strange now to walk out of our back door at home and not hear him calling out to me, which he did all the time, always reminding me that he was there and would love to see me – particularly if I had some food for him. He will be deeply missed by others, too, including my mum who looked after him whenever we were away, my husband and daughters, and our neighbour, 11-year-old Erin, who, without fail, ran over to see Colonel as soon as she arrived home, for a cuddle and a treat. PONY readers often wrote to us about Colonel, and I know he touched your hearts as well.

We all have wonderful memories of a truly remarkable pony.

4 responses to “Tribute to Colonel”