Real-life Drama: Our ponies galloped toward the road!

A normal day at the stables turned out to be rather out of the ordinary... 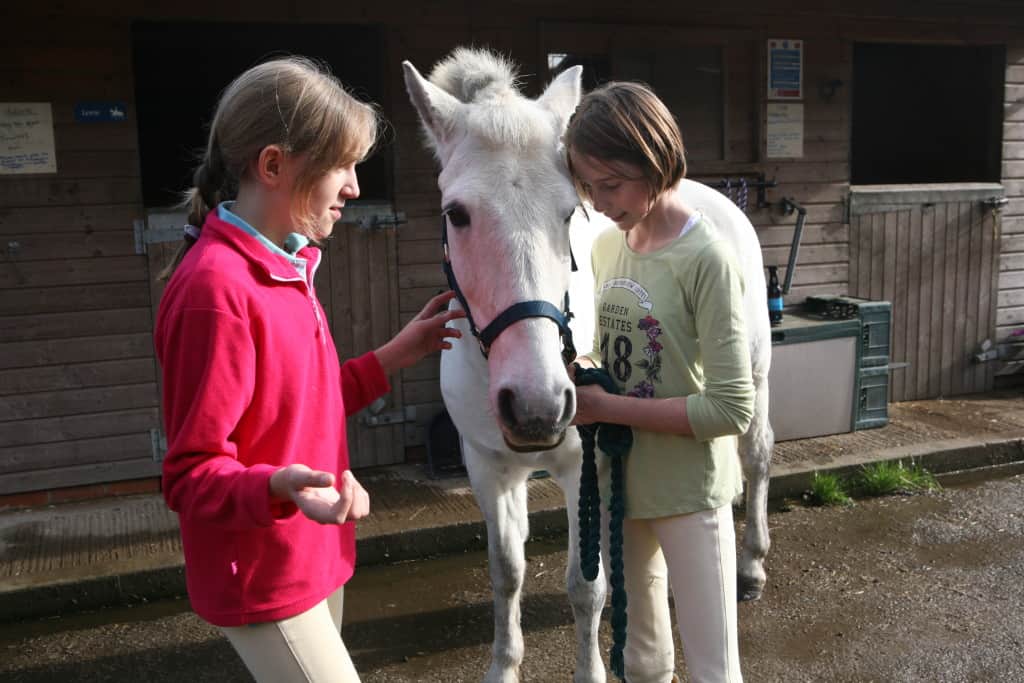 It was just a regular day at my stables. I was just putting my pony Mia onto the cross ties, and my friend Cydney had gone to the far paddocks to get her pony Nellie.
After a few strokes of my brush our instructor Nora arrived. We greeted each other and got caught up on the daily news then went off to catch Seth from the paddock, so he could be used for lessons that evening.

A few minutes later, I heard a scream. I threw my brush aside and quickly ran to see what was wrong. I was shocked as I looked towards Seth’s paddock to see that as Nora had tried to take Seth out of the field, his pasture-mate, Sage, had ploughed through the gate and was running around loose! Seth in turn became excited, and he bucked, reared and took off! Refusing to let go of the lead rope poor Nora was dragged along the ground.

Without any time to think I ran inside and grabbed a bucket of feed and jumped out shaking the bucket wildly to get the ponies attention. Sage came towards me, his ears pricked with curiosity, but just as I reached for his halter, Nora let go of Seth’s leadrope and he took off, with Sage following!

Next thing we knew, Sage and Seth were running straight for the barn, inside which my pony Mia was still on the cross ties! Sage flew through the barn doors and tried to run past Mia, but he got himself caught on the cross tie and he couldn’t get through! He pulled back hard then pushed forward again, trying to get by, pulling Mia with him. Poor Mia reared and whinnied in fright. I knew I had to make Sage stop so I sprinted toward them, grabbed the cross-tie, and pulled it up high so Sage could duck under and get away from Mia. I thought Sage would just stop in the barn, but he didn’t.

He galloped out through the other end and met up with Seth on the other side. Then together they raced on… toward the main road!

By this time Cydney was back from catching Nellie and she ran over to help. The ponies were getting closer to the road just as a car came screeching to a halt behind us. “Get in!” yelled Nora, and Cydney and I dived into the back. As we took off after the ponies we couldn’t help wondering if they would turn left or right. If they turned left they’d reach the dual carriageway. If they turned right they’d reach a hill around which cars are known for speeding!

Their heads looked left and right trying to decide which way to turn, and just as we reached them, the ponies decide to go right. Just in the nick of time, before they got much further, a lady spotted the ponies and stood in front of them, blocking the road. Startled, Seth and Sage made a U turn onto someone’s driveway. I quickly jumped out of the car and stopped the traffic coming from the other direction. Cydney and Nora also jumped out of the car with feed buckets and leadropes in hand.

With the evil glint gone from the ponies’ eyes they made their way toward me, looking defeated, and finally let us catch them. I took Sage’s lead rope and we started the long walk back to the stables. Back at the yard, we finally put the tired ponies quietly into their stalls.

We don’t know how Sage and Seth managed not to get killed, and we don’t know why they turned right instead of left.
All we know is that the day turned out to be a not-so-regular day after all!