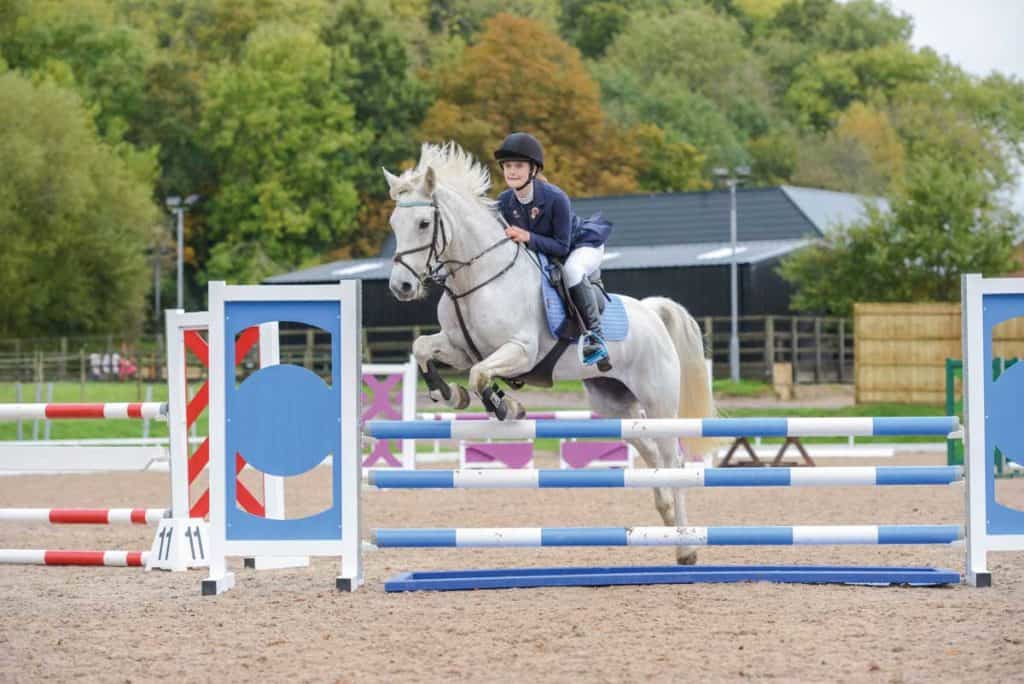 I woke up super-early as I was so excited to be going to my first ever team showjumping competition with my friends. It was the perfect day for it – cold and crisp without a cloud in sight. Best of all, it wasn’t raining! Mara, my pony, welcomed me to the yard by whinnying from her stable as soon as she saw me. “She must be excited, too,” I said to Mum, who was driving us there. She helped me load my tack into the lorry and put Mara’s travel boots and tail guard on. We were all set to go.

Three of us met at the venue around the same time. We were so excited that we couldn’t stop chatting. “Have you heard anything from Robyn?” I asked Lottie, when there was no sign of our fourth team-mate. “No, nothing, but don’t forget she’s always late!” Lottie replied.

“What’ll happen if she doesn’t turn up? I don’t want to be eliminated before we’ve even begun,” Harry questioned as he walked over to join us. We all looked at each other doubtfully. “It’ll be fine,” I said, anxiously checking my phone for any messages from Robyn.

The rules of the competition were that each rider from the team had to jump a different height. So, Lottie would be first up jumping a course of 60cm fences, then Harry would jump 70cm. I was doing 80cm and Robyn was supposed to be in the 90cm. She was an amazing rider, and a little older than the rest of us.

We all walked the course with Lottie, as this was only her third showjumping competition ever. “I’m so nervous,” she said, as we strode out the double together. “Don’t worry,” Harry replied. “The highest three scores are the ones that count, so if one of us has an epic fail it doesn’t matter.” We both looked at him, unconvinced. “I mean, I’m sure we’ll all do great,” he said. Lottie forced a smile.

We went back to the lorry park and Lottie got straight onto her little palamino pony, Will. He was so adorable – 12.2hh and very nippy with an enormous jump. I prayed that he’d behave himself for Lottie today.

After warming up, Lottie entered the arena for her round. The bell sounded and off she went. Will was travelling super-quick, and I could see the look of concentration on Lottie’s face from where I was standing at the ring-side. I held my breath when they wobbled a pole, but it stayed in place. They zipped over the rest of the fences to achieve an amazing clear round. Everyone cheered and Lottie beamed from ear to ear.

After the 60cm rounds had ended, it was Harry’s turn to start warming up. He’d done lots of showjumping competitions with his little mare, Cali, but had only just moved up to 70cm classes. Nonetheless, I was sure he’d pull off a great round. As I watched him canter around the jumps waiting for the bell to sound, I got distracted by my phone ringing. It was Robyn. I answered as quickly as I could. “Hey, where are you? Are you okay?” I heard her sniff down the phone. “I’m so sorry, Isla,” she said, crying. “Toto won’t load. We’ve been trying for nearly an hour and a half and it’s just not happening. I can’t believe I’ve let you guys down.” She sounded really upset and my heart sank. I assured Robyn it wasn’t her fault, but I was devastated and I knew the others would be, too.

A twist of events

As I got off the phone, there was a clatter. Harry had knocked a pole. Luckily though, he managed to finish the rest of the round with only four faults. I went over to congratulate him and join Lottie, who was watching with her parents. Harry wasn’t as thrilled as Lottie was with her round, but when I told them the news about Robyn, everyone was disappointed. “And there’s no way she can get here?” Lottie asked. She looked crestfallen that her amazing round wouldn’t count .“Nope,” I said. “Toto’s refused to go in.” We all hung our heads in defeat. “Hang on,” said Mum. “Aren’t the rules at this show that one rider’s allowed to jump in two rounds if they only have a team of three?”

Lottie gasped. “Isla! You can do it!” My stomach churned. “But I’ve never jumped a 90cm course before.” I looked at my feet, nervously.

“You could totally do it, Isla! I’ve seen you train over fences way bigger than that,” Harry agreed.

“Go on Isla, we all know how talented you and Mara are.” Lottie’s big, pleading eyes were staring up at me. Mum nodded in agreement. “Fine – I’ll give it a go.” I was scared, but I couldn’t let the team down. At least there’d be a practice run over the 80cm course first. We all headed to the secretary’s office to let them know.

My 80cm class didn’t go so well, as we knocked two poles down for eight faults in total. I was so focused on having to do the 90cm later that I know I didn’t ride at my best. It ramped up the pressure, but I’d promised to give it a try.

It was our second time in the warm-up arena and Mara felt even more raring to go now. Jumping was her fave thing in the world and I could tell she couldn’t wait to get back in the ring. We were third in the running order, so I planned to quickly re-walk the course, as they’d changed a few of the jumps, then get back on ready to go. “Course walk for the 90cm is starting now,” announced the tannoy. My knees felt weak, but Mum held Mara while I walked the course with my team-mates. The fences seemed massive and I felt sick with nerves.

Remounting Mara, I waited for my turn and soon enough, we entered the ring. As we cantered round, I was trying not to think about the height and just ride it like any other course. I had to forget that the rest of my team’s hopes were resting on me. The bell rang and off we went. I kept positive, my competitive spirit taking over. Mara soared over the first and second fence. Her ears were pricked and I could tell she was enjoying it. I had confidence now, and pushed her on, popping numbers three, four and five, before sailing through the double at fence six. The next few were wide, and I had to slow Mara up a bit so she didn’t rush, but we managed to clear them all. The crowd clapped and I heard my team-mates cheering super-loud. Everyone came over and made a huge fuss of Mara, who adored the attention. We both knew we’d tried our absoloute best.

After everyone had ridden their rounds, we waited anxiously for the results.  Our team came fifth place overall, and we couldn’t believe we’d done so well. We were jumping up and down with excitement as it had been so much fun competing together! Mara had jumped her heart out for me, and I couldn’t have been happier with her. I texted Robyn to let her know how we’d got on and she messaged back to say she was really pleased for us. I was so proud of Mara and my team mates that it turned out to be one of the best days ever. I just hope Robyn can come next time, too!