Aimi is devastated when her pony, Sam, has to go to hospital for emergency treatment 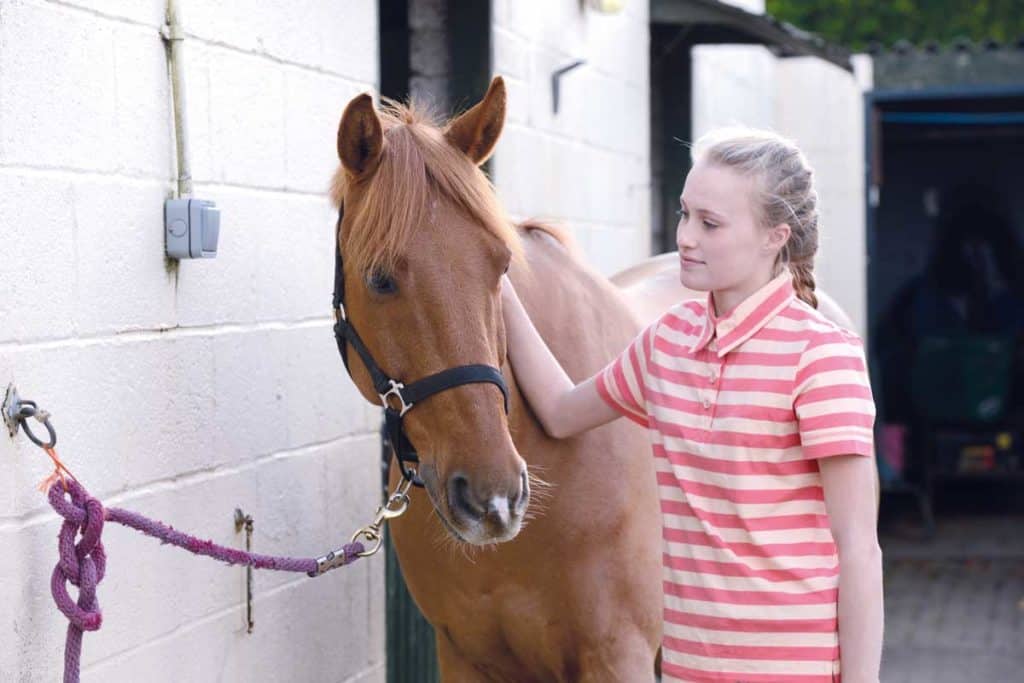 I was thrilled when my parents told me I could have a pony of my own. I’d been going to our local riding school for years, and had begged my parents to buy me a pony for ages. After weeks of searching we finally found Sam. He was absolutely perfect and I couldn’t wait to start our journey together.

Thankfully, I was able to keep Sam at my riding school, so I had loads of help. We had such an amazing summer together, competing in local shows, hacking out with friends and we even joined the Pony Club and went to camp! I couldn’t believe my luck, Sam was the best pony in the whole world!

Then, one afternoon I brought Sam in from the field and he didn’t seem quite like himself. I put him in his stable and called the yard manager, Kim, over to take a look at him.

“He’s just not his usual self,” I explained, leading her to Sam’s box. “What do you mean?” Kim asked as she looked over his stable door. “He didn’t want to walk from the field and he didn’t whinny at me.” I watched nervously as Kim examined Sam, feeling down his legs and checking him for any signs of injury.

“It’s so hot today, I think he might just be feeling a bit grumpy,” she finally said, closing the stable door behind her. “I’ll keep checking him, just to be sure.” I thanked her and set about getting Sam settled in for the night, but despite her reassurances, I couldn’t shake the feeling that something was wrong.

A turn for the worse

The rest of the evening crawled by as I waited for Kim to text me about Sam. Then, at 9pm, Mum’s phone rang and I just knew it was bad news.

“Hello,” she answered, and after a second she glanced at me, stood up and moved out of earshot. My heart raced, what was wrong with Sam? It seemed like ages before Mum came back into the living room.

“Aimi, Sam’s sick,” she told me in a calm voice. “Kim’s called the vet as she thinks he has colic.” I felt numb, this couldn’t be happening. “Can I go see him?” I asked, trying and failing to keep from crying. “I think it’s best if you stay here with Dad and try to get some sleep. I’m going to head over now to meet the vet.”

So, Dad and I put on my favourite film to distract us and waited anxiously for news.

I don’t remember falling asleep, but I woke up the next morning on the sofa under a soft blanket. I could hear Mum in the kitchen, so I leapt up, desperate to hear about Sam.

“How is he?” I asked. “He had to go into the hospital for colic surgery,” she told me, giving me a hug. “The good news is, the surgery was a success, but he’s got to stay in the hospital for a few days. We’ll find out more later.” She smiled tiredly at me. “As soon as you’re dressed and have eaten breakfast we can go and visit him.”

When we arrived at the hospital, we had to wait in reception for a vet to show us to Sam’s stable.

“The surgery went well,” Simon the vet said, leading us down the yard. Mum gave my shoulder a squeeze as we saw Sam. He was standing in the middle of a large stable, with a comfy paper bed. There was a massive bandage wrapped around his stomach and he had a drip attached to his neck, too.

“Can I go in?” I asked Simon, not daring to look away from my pony. “Of course,” he replied. I barely heard a word he said, my focus was entirely on Sam. Mum called my name three times before I realised she was even talking to me.

“Aimi! Did you hear that?” When I looked at her blankly, she repeated what the vet had told her. “Things are looking positive for Sam’s recovery.” I could hardly believe my ears, I’d only heard of ponies dying of colic. I didn’t even know they could get better again.

“Really? Are you sure?” I asked the vet, grabbing Mum’s arm intently. “He’s responding well after the surgery, but we’ll need to keep a close eye on him.” I was so ecstatic I threw my arms around the vet and gave him a hug.

Sam had to stay in the equine hospital for a few weeks before he was allowed home. He was then on box rest at the yard and I spent all my free time hanging out with him.

After following our vet’s advice to the letter, Sam’s gone from strength to strength. I’ve just started riding him again and am making plans for the future. I feel so lucky that my pony is still here with me, and I’m going to make the most of every day we have together.