Becky and Pinqui were both loving every minute of their cross-country round and everything seemed to be going according to plan... 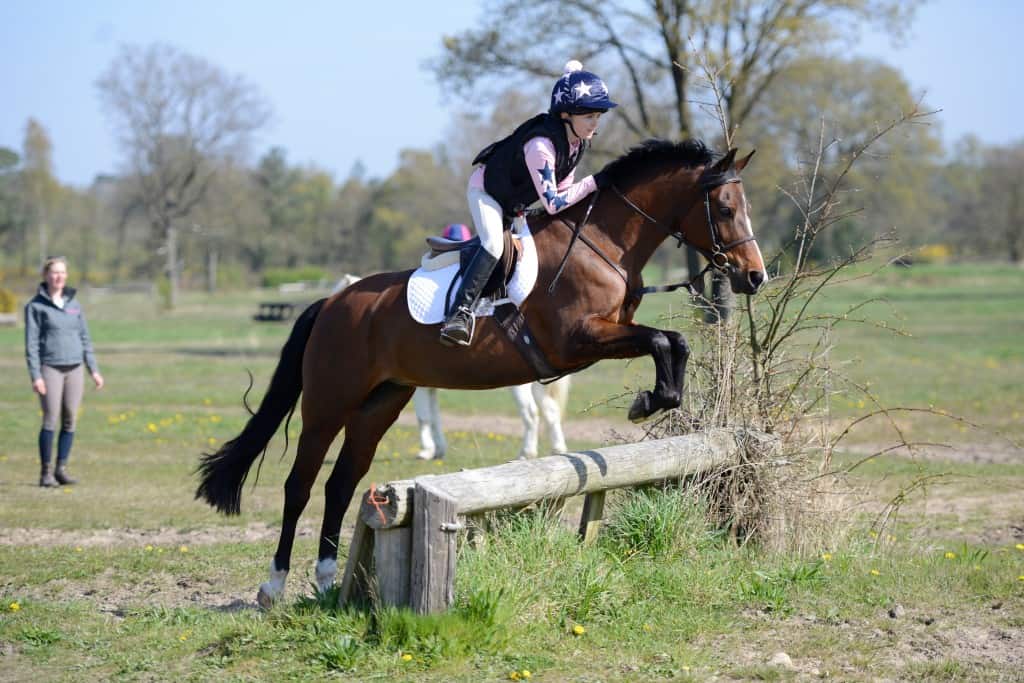 My horse Pinqui is a 15.1hh, 19-year-old Thoroughbred-cross. She is very cute, loves to go fast and cross-country is her favourite discipline – which is just as well, because my riding teacher, Sharon, organised a cross-country day with the other girls I ride with, including my older sister, Katie. I couldn’t wait, it was going to be so much fun!

It was the day of the cross country, and we all groomed and prepared the horses, then loaded everything into the lorry. It was going to be an exciting day for Mum as well, because it was to be her first time driving the lorry – although it did take us ages to get there!

When we finally arrived, Sharon told us that she was going to de-fizz all the ponies for us by riding them round the cross-country course first, then she would take us one-by-one for our warm-up.

So she took Pinqui and they jumped really nicely, but there wasn’t enough time for me to have my warm-up before we started the competition.

The course catered for all levels of experience and each jump had three options – bronze was easy for one point, silver was more difficult for two and gold was big for three points. So I decided to jump straight in at the deep end and go for gold at the first jump.

In hindsight, however, it probably wasn’t the best decision, because Pinqui refused it twice, so I jumped the silver instead. Then everything went very well after that and we jumped the next few gold fences, including the bench jump.

The sixth jump, however, was a set of three steps, which Sharon decided would be better to jump up instead of down.

I jumped the middle-sized steps, as I thought Pinqui would find that easier. I trotted up to it, then cantered the last stride and was happy to say I made the right decision this time – Pinqui flew up them all!

Unfortunately, though, I lost both my stirrups, but Pinqui carried on cantering – in fact, she was having so much fun that she bucked! And then the unexpected happened… I flew off backwards and crashed to the floor.

I tried to sit up, but every time I lifted my head, my neck hurt and I felt terribly dizzy. I was obviously concussed.

Luckily, my mum’s a physiotherapist, and there was also a doctor there. My mum and Daniel, the doctor, instructed me to stay lying down, which I did because I felt awful.

So I just lay there, not believing this could have happened – I’d been looking forward to this day, our dream event, for ages and all I wanted to do was carry on!

Not wanting to risk anything to chance, however, Mum decided that it would be safer to call an ambulance. But when she phoned them, she was told that there were no ambulances available. And as I was in the middle of a field – which, in any case, may have made access quite difficult for an ambulance – they decided to send an Air Ambulance!

The helicopter arrived and I was fitted with a brace to support my neck and head, then I was lifted on to a very uncomfortable, plastic stretcher. I had to lie very still and not move, then I was placed carefully into the helicopter and we set off – quickly, but very noisily!

When I arrived at Salisbury District Hospital, I went straight into the A&E department, where they checked me over for any obvious damage. I also had an X-ray just in case, but luckily, there were no broken bones – I’d just bruised my neck.

I was allowed to go home after three hours and had to wear a neck brace for about a week – which, of course, meant no riding and certainly no cross country! And although I was devastated to have my fun day cut short, I wouldn’t recommend doing what I did to anyone, because it was very uncomfortable!

It’s easy to make light of it now, because everything turned out all right in the end, but it would have been so easy to have lost my confidence – Pinqui, too.

Happily, however, we’re both jumping again and I don’t feel nervous at all. And I tell myself that the day might not have ended as happily as it did, had I not been wearing my riding hat and body protector – so that’s a lesson to everyone.

The outcome could have been very, very different…