Real-Life Drama: Lucky to be alive!

Could Flintoff defeat the odds to survive his injury? His owner Emily feared the worst... 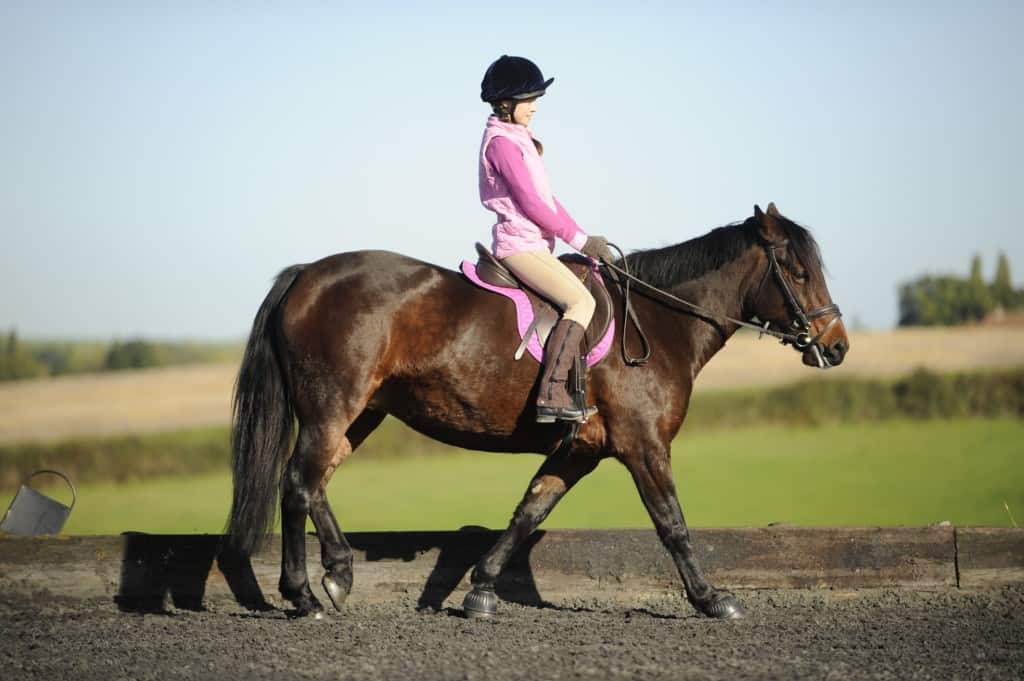 Howen Flintoff is a 13.2 New Forest gelding. We have owned him for four years and he is 12 years old. Flintoff is my ex-dressage pony. He represented Northern BYRDS at the
inter-regionals and qualifi ed for British Dressage area festivals, fi nishing in the top 10. However, Flintoff is a very lucky
pony to still be wandering the fields and yard today. Let me share my pony’s unbelievable story with you…
It will have been about a year ago now when it happened. The day started fine, and I arrived at the farm to ride my other pony after school. When I went to feed Flintoff in the field, I suddenly realised something was drastically wrong. Rattling the feed bucket, I shouted and shouted, but he never came to the gate, which was unusual. Then he appeared at the top of the hill, and I could see that he was hopping lame! Thinking he must have a stone in his hoof or something, I ran to him
and tried to lift up his hoof to check it, but he couldn’t move it. Then I saw he had an injury on his elbow, which was bleeding.
It took five of us to get Flintoff out of the field and into the lorry to go to the vet practice in Clevedale for an X-ray. It revealed that Flintoff’s elbow was fractured in two places. Our vet contacted the top veterinary college in Newmarket, which began making a metal plate to fi t in Flintoff’s elbow which would stay in his body forever.
Flintoff’s joint was fl ushed carefully as with such an open wound there was a very big risk of infection in the joint. If
this happened, there would be nothing anyone could do to save him. As soon as Flintoff arrived at Newmarket he was rushed into the preparation room to have his leg shaved for his operation. We waited with him until he went into theatre, with Flintoff nosing around the shavings in his bed, finding blades of grass to eat. Bending down to help
him I found a four-leafclover buried under the shavings! I so
hoped it was a good omen.

At about 10 o’clock that night we had a phone call from our vet to tell us that Flintoff had been in theatre for five hours, and he was just starting to come round! He told us that Flintoff was coping brilliantly and said that Flintoff would be assisted to his feet by a hoist and have round-the-clock
care by the vets. There was still a risk of my pony getting colic
or the plate work in his elbow falling apart, and he could
still suffer from infection, but all the vets would be doing
everything possible to make sure he recovered. It was just a
waiting game.
Two weeks later the vets told us Flintoff could go home! As we drove to Newmarket my mum warned me that Flintoff wouldn’t be his usual self, and could seem a little sad. In reception I was on the edge of my seat, I was so excited at the thought of seeing Flintoff again. The nurse took us to the yard to see him and as soon as Flintoff saw me he gave out a little whinny, cheekily trying to push the stable door open as I
put on his headcollar.

Before leaving, we took a look at Flintoff’s X-rays with the vet who performed the surgery. Flintoff now has nine screws and a metal plate around his elbow! It was amazing that nothing had gone wrong because it was such a risky operation that had never been done before. Flintoff is a very lucky pony! All the vets at Newmarket told us he was a little soldier, and they wished all their other equine patients were as easy to deal with as my New Forest pony! I have ridden Flintoff since his accident – and he is even more naughty and cheeky!

However, I forgive him as he went through such a drama!