Evie is super-excited when Lettuce is born, but within days the tiny foal is fighting for her life 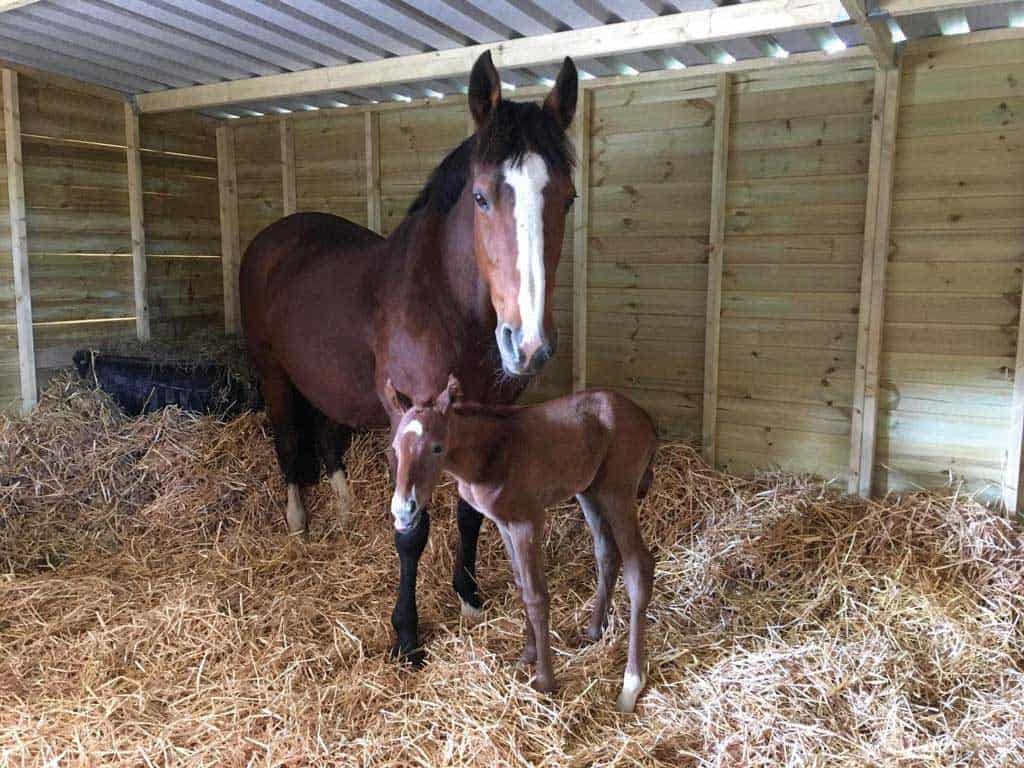 When Mum told me her horse, Gem, was going to have a foal I was sooo excited. Everything with the pregnancy went well, but it felt like the longest 11 months of my life as we waited for the foal to be born! Finally, the due date arrived and I tried to convince Mum to let me stay at home, but she laughed and told me that foals, like babies, are hardly ever born on time. She sent me to school, but promised to text me if Gem went into labour. Despite checking my phone as often as I could throughout the day, no text arrived.

As soon as I got home, I rushed to Gem’s stable to check on her. She looked up when she saw me, but continued to chomp on her haynet and there was no foal in sight.

I waited and waited, then two weeks after Gem’s due date Mum woke me up with the best news – Gem had given birth to a filly!

“Really?!” I squealed in excitement. “Can I go and see her now?” I was already out of bed and rushing to put some socks on, not even bothering to change out of my pyjamas. “Of course,” Mum laughed, following me downstairs. I quickly pulled my wellies on and ran out to the yard.

The foal was absolutely gorgeous. She was a bright chestnut colour with the cutest white star on her forehead – she was perfect! She stood by her mum, looking at me with big, curious eyes.

“We’re going to have to think of a name.” I hadn’t noticed Mum had joined me before she spoke, as I was too busy admiring the beautiful little foal.

“What about Lettuce?” I said after some consideration. “Because she’s a little Gem, like the lettuce!” The foal pricked up her ears as I said her name a second time, which I took as a sign that she approved. “Alright, Lettuce she is,” Mum replied with a laugh.

Lovely Lettuce was born on a Friday, but by Sunday we were getting worried that she wasn’t drinking enough milk. She also started showing signs that her tummy was feeling uncomfortable. Mum was so worried she called our vet, Stephen, who came as quickly as he could.

I hovered near the stable door as he examined Lettuce, keeping everything crossed that she was going to be okay.

“It looks like she’s got a bacterial infection. We need to get her to the equine hospital to run some more tests to be sure,” Stephen told Mum. I couldn’t stop the tears as they fell down my cheeks – Lettuce was so small, how could she fight an infection?

When we pulled up in the car park, there was a flurry of activity as the nurses helped us unload Gem and Lettuce and got them settled into a stable in the intensive care unit. Mum gently pulled me away to reception to wait for more news while the vets checked Lettuce over. Finally, Stephen came to find us and tell us the results of the tests they’d taken.

“Unfortunately, Lettuce does have a bacterial infection,” he said. “It’s a pretty serious one – we’ll do everything we can, but little Lettuce has a fight on her hands.” I was in total shock. Lettuce couldn’t die, I wouldn’t let her. Mum gave me a hug, and I sobbed into her jumper. “Okay, what happens next?” Mum asked Stephen in a shaky voice. I could tell she was close to tears, too. “Well, she’ll need to stay here for a couple of days, so she can have round-the-clock care,” Stephen replied. “Why don’t you go home and try and get some rest. I’ll call you as soon as we have an update.”

I hated having to leave Lettuce and Gem. I didn’t get any sleep that night, so I was super-tired at school the next day.

Lettuce was in intensive care for five days, but thanks to the amazing vets and nurses, she slowly but surely began to get better. Mum and I visited her every day, and she looked tiny with a huge pink bandage around her neck that protected the needle that allowed her to have fluids and medicine.

On the sixth day of her hospital stay, Lettuce was given the all-clear to come home. It was a massive relief, but we had strict instructions about how to care for her. We needed to monitor her temperature, and give her antibiotics twice a day for a week.

I was so happy she was home, I got up extra early before school to help Mum take Lettuce’s temperature and give her the medicine. Then, as soon as I got back in the evening, I’d rush down to the field to check on her again. I even did some of my homework sitting by the field gate while Gem and Lettuce grazed.

Lettuce is now perfectly healthy, and she’s grown into a cheeky foal with loads of personality! She loves being the centre of attention and will often groom Gem while I scratch her withers! I’ll always be grateful to the vet team who took such good care of her while she was poorly. I spend every minute I can with Lettuce and Gem and I love watching them play together in the field.