When Ella watched her fave pony go off to a show without her, she never realised it would bring them closer together...

I’d been having lessons at my riding school for so long that I could take my pick of any of the ponies to ride. Some I knew would be keen to canter and jump, while others preferred to hack out. But my favourite has always been Salsa – a grey Welsh Mountain pony who’s known for his cheeky nature. Cathy, our instructor, calls him the class clown. He always seems to do something to make the whole ride laugh.

Either he’ll refuse to go past the gate towards the end of the lesson or he’ll try to duck in behind the ride when we’re supposed to be cantering past to the front. But that’s what I love about him – he’s not a push-button pony and you have to focus at all times to get the most out of him. I’d always dreamed of having him on loan, but I live with Lin, my granny, and we couldn’t afford to loan a pony full-time, so I had to make do with lessons.

A big county show was coming up that everyone at the yard wanted to go to. The yard had some trailers we could borrow, but we didn’t have the right car to pull one, so I couldn’t go. I knew someone else would choose to take Salsa to the show because he loves to jump – the bigger the fences get, the more forward-going he to becomes!

In the end it was Sam, a new girl on the yard, who was going to take Salsa and she’d been boasting about how they’d bought a second-hand trailer especially to take him.

On the day, I helped get him looking spotless for Sam, grooming him and plaiting his mane and tail. I was even asked to lead him onto the trailer – we have a special bond that everyone on the yard can see.

Lin put her arm around my shoulders and said: “Why don’t we go and watch how he does at the show, it might be nice to see him win a rosette?” Holding back my tears, I nodded my head and she gave me a big hug, saying: “You’re very brave, Ella.”

We followed them out of the yard and once again I had to fight to hold back the tears. The trailer in front of us squeaked and rattled, and I watched Salsa’s ears flicker as he turned his head. I thought he was trying to look back at me, but something in the way he was nodding didn’t seem quite right.

As they pulled onto the main road I saw his hindquarters rise up and could hear him stomping hard with a back hoof. “Lin! Something’s not right!” I screamed as he jigged again and a splintering sound could be heard above the noise of the traffic.

“We’ve got to stop them!” I shouted as Lin hooted and flashed her lights, pulling up closer to the speeding trailer. Salsa was now throwing himself violently from side to side. Suddenly he disappeared and a broken piece of wood landed on the road in front of us.

Lin had got their attention by now and, as they slowed to a halt, Sam jumped out, exclaiming: “What’s all the fuss?” Salsa had felt a weak spot in the trailer floor and his hoof had gone right through – luckily with no injury. Sam burst into tears while her father spluttered: “They told me it had a new floor when I bought it!”

Lin helped me lower the ramp and we led Salsa off the trailer, sweating and shaking. “Could you walk him home for me, please Ella?” Sam managed between sobs.

Back at the yard I was treated like a hero, but I kept telling everyone it was Salsa who saved the day as he knew there was a problem. Five minutes later they would have been on the motorway and things would have been a lot worse.

I saw Cathy take Lin to one side as I put him away in his stable and filled his haynet, but it wasn’t until later that night that she sat me down.

“Ella, how would you like to take Salsa on as a full-time loan? Cathy says in return you could help out with the younger riders.” I jumped up and threw my arms around her neck. “She also said she might give you a lift to the next show if you work extra hard!”

It was the best thing that ever happened to me. Salsa and I haven’t looked back since and I now have a wall full of red rosettes – dreams really do come true! 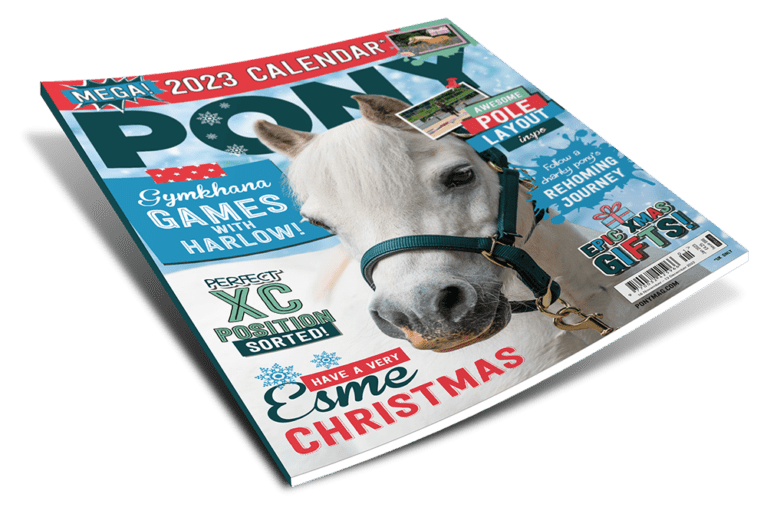