We found a runaway pony!

Sadie and Alice were out hacking one glorious Sunday, when they came across something unexpected 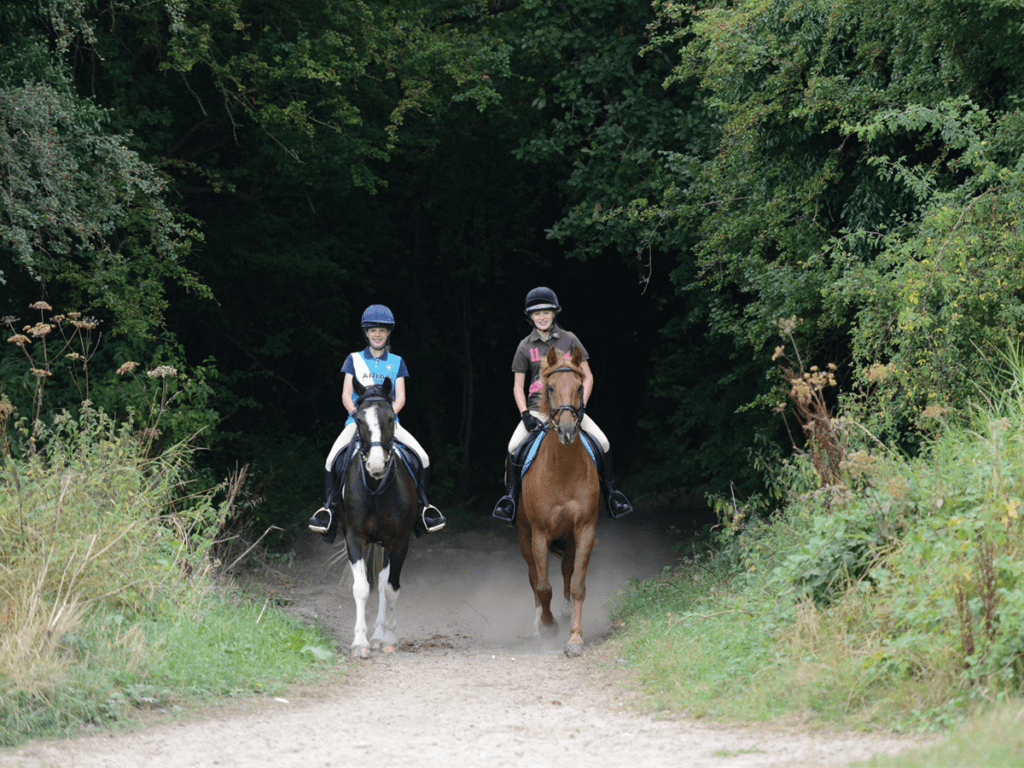 Alice and I are great hacking buddies. We always go out on long adventures at the weekend, but there’s one route that’s our particular favourite as it has a fab sandy canter track that we can race along. Our ponies, Alfie and Bramble, are pretty evenly-matched in speed, so we keep score on our phones to see who’s winning at the end of every month. One sunny spring day, we decided to go for a hack along our favourite route, but it didn’t quite go to plan.

“Ready?” Alice asked, as she led her pony, Bramble, over towards Alfie’s stable, where I was hurriedly trying to tighten his girth. “Yep, just one sec!” I wheezed, as Alfie eventually stopped puffing his tummy out long enough for me to tighten his girth up.

“Usual route?” I asked as we clambered on from the mounting block on the yard. “You bet,” Alice responded, “we’ve got to beat you on the long sand track this time, you’re two-nil up!”

We carried on chatting and laughing as we made our way along the bridleway, letting the ponies have a stretch and a trot to warm up nicely. They seemed to be enjoying it as much as we were and I could feel Alfie walking faster as we approached the canter track.

“Hey, that’s not fair!” I laughed, as Alice pushed Bramble into canter before me. I squeezed Alfie on after them, leaning forward in the saddle to give him his head – I knew he’d always stop when I asked him to, even if Alice sometimes had difficulty with Bramble’s brakes.

“Hold on, there’s something on the track ahead,” she called out to me as Alfie and I started to catch up. “Yeah, right!” I replied, “you just want to win today’s race!” By then we were neck and neck, but I could see she was actually trying to pull Bramble up, without much luck.

I looked ahead, trying to see whatever it was Alice had caught sight of. All of a sudden, I saw a small, fluffy and rather fat Shetland pony emerging from some shrubs up ahead, right in the middle of the canter track!

“Whoaaaa, whoa Alfie,” I said quite firmly as I pulled him up before we reached the pony. As usual, he responded straightaway, although I could tell he was rather confused as to why I was asking him to stop! Luckily, Bramble slowed up with Alfie and I saw Alice breathe a sigh of relief.

The Shetland turned and looked at us, as if he was unaware of the drama he’d caused. “Well then,” I said, uncertainly, “what exactly do we do with that?!”

We knew we couldn’t leave the Shetland to roam on his own – what if he got stuck or wandered onto a nearby road? We both dismounted, and Alice held onto Alfie and Bramble while I cautiously approached the pony. Luckily, in typical Shetland style, he was more interested in what was in my pockets and walked straight up to me.

It was soon clear the pony was rather happy to have found some new friends and was going to follow us. We didn’t want him to go anywhere near a road, so, walking our ponies in-hand, we slowly encouraged him to follow us to a nearby livery yard.

“Hello?!” I called out as we approached the yard’s gate. “Yes, what do you want?” a cross-looking woman snapped as she strode towards us. But, as soon as she spotted the Shetland, her face softened. “Oh my goodness, you found him!” she exclaimed, rushing to get a headcollar.

The yard owner told us how she’d bought the pony for her niece, but he’d turned out to be a bit of an escape artist. She was so thrilled we’d bought him home safely and we were pleased we’d managed a good deed for the day.

“I suppose that race was a draw, then,” Alice asked hopefully as we trotted home once the Shetland was safely back in his field. “You wish!” I giggled, “get ready for a rematch next weekend – and prepare to lose!”