Does your fave pony live out? Here’s how to keep him in tip-top condition this winter 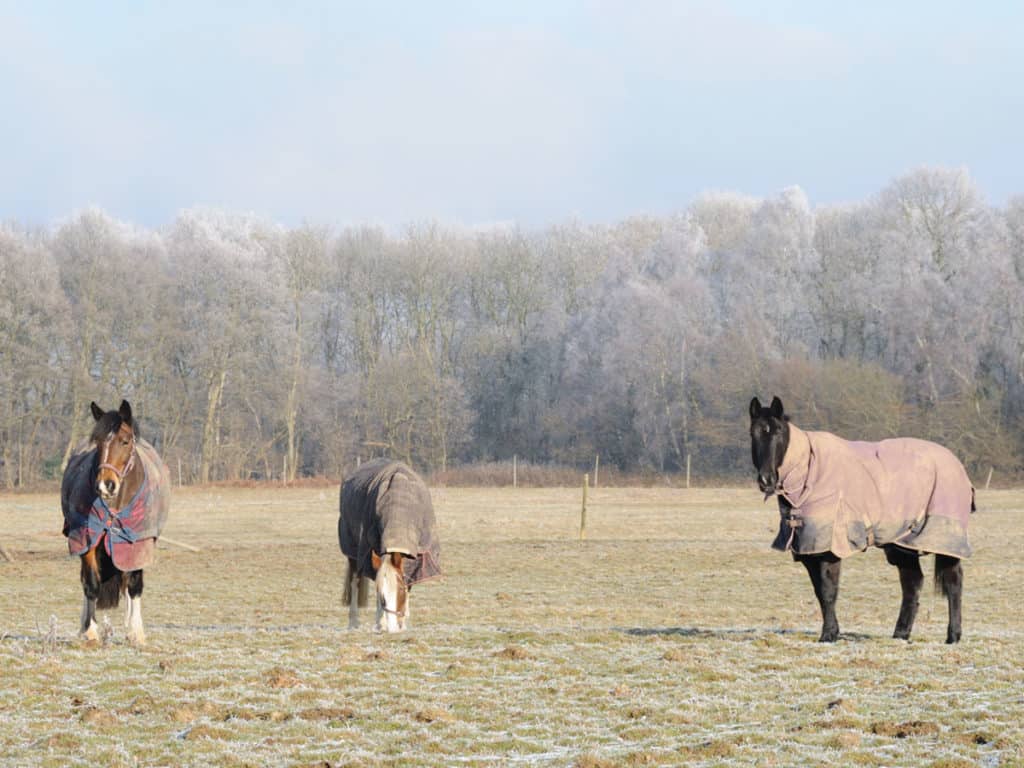 Winter brings all sorts of challenges when it comes to looking after your fave pony, especially if he lives out. From muddy fields to frozen taps, there’s a lot to think about and you’ll often end up having to do your chores in the dark, too.

TOP TIP – If your pony has a large trough, floating a clean tennis ball in his water can help prevent it freezing. It’s best not to do this in a small bucket, though, as he might be reluctant to drink from it.

It’s super-important to check your field-kept pony twice a day – once in the morning and once in the evening. In winter, the weather is much more temperamental and cold conditions mean his water trough could freeze over. Your daily checks should include…

Grass decreases in quality over the winter, which means your pony doesn’t get as many nutrients from it, so it’s important to make sure he’s receiving all the vitamins and minerals he needs.

If your pony’s having the amount of feed recommended on the feedbag, then he’ll be getting a balanced diet. But if he’s having less than this amount, you’ll need to top it up with a general-purpose supplement. If he doesn’t need hard feed, a balancer is a better alternative because it can easily be fed on its own. You could also provide a field lick.

If his field is low on grass or there are lots of ponies grazing on it, you might also need to supplement his fibre intake by providing him with hay or haylage in the field.

TOP TIP – Remember to provide more piles of hay than there are ponies in the field to prevent fighting.

Shelter from the elements

Field-kept ponies should have shelter to protect them from rain and bad weather. If your shelter is portable, it’s a good idea to move it to different areas of the field regularly to prevent it getting too muddy inside and around it.

If you’re unable to move it, you could put bedding inside so your pony has somewhere dry to stand out of the mud.

TOP TIP – If it’s snowy outside, rub grease onto the soles of your pony’s hooves. It’ll help prevent any snow packing up inside them.

Clipping is common over the winter to stop ponies getting too sweaty during exercise and to allow them to dry more quickly. But if your pony lives out, you’ll need to think more carefully about what type of clip he should have and what rugs you’ll need to ensure he stays protected from the elements.

It’s best not to fully clip ponies who live out and, at the very least, to leave his legs and half his head unclipped as these areas aren’t covered by his rug. Plus, hair on his legs provides a barrier against mud and dirt, and could help prevent skin conditions such as mud fever.

At the same time, if your pony gets super-sweaty while you’re riding, you might want to think about taking more of his hair off to keep him drier, which will help prevent him getting a chill when you turn him back out.

Mud and winter might go hand-in-hand, but there are a few things you can do to try to keep it at bay and protect your pony through the wet, cold weather.

1. If possible, move around his water buckets and where you put out his hay. These are areas where he’ll stand often, so by moving them to different parts of the field, you’ll help stop certain areas getting muddy super-quickly.

2. Ask your yard owner about putting hardstanding or grass matting around gateways.

3. If your fields are particularly muddy, think about bringing your pony in somewhere dry, such as a stable or an arena, for a couple of hours to allow his legs to dry.

4. Rotate which fields you turn your pony out in to give them time to rest and dry out.

5. Consider using breathable turnout boots that are specially designed to keep mud away from your pony’s legs. But, remember to check them regularly to make sure the mud isn’t getting underneath and rubbing him.