Can you speak pony?

As pony lovers, it’s our responsibility to ensure we understand his body language to spot when he’s unhappy or stressed before he shows it in other ways, such as biting, kicking or bucking. 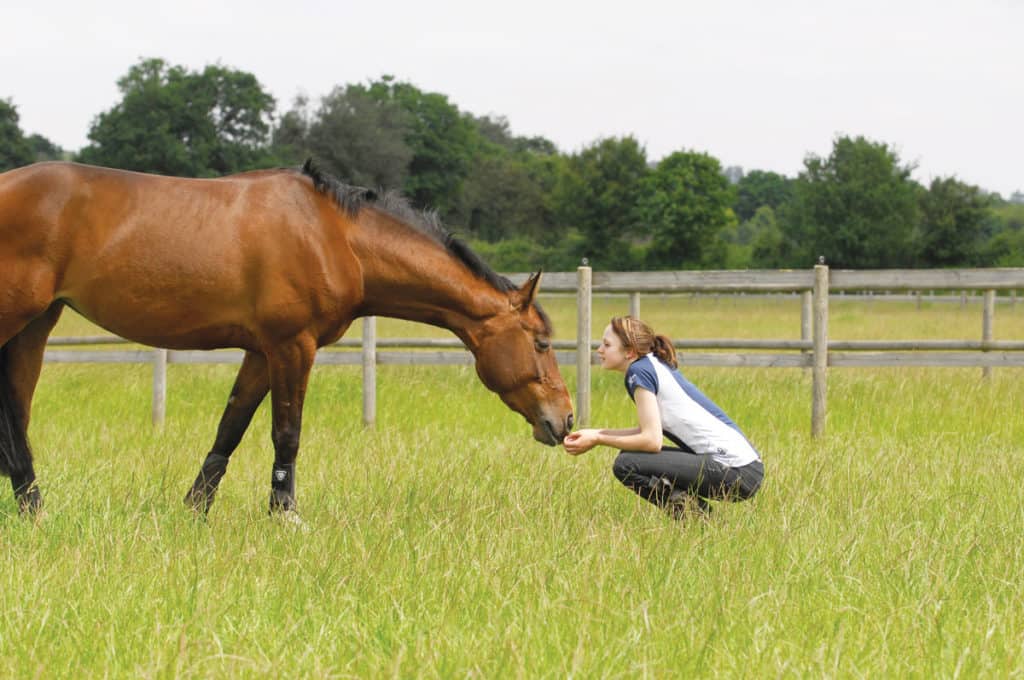 Ponies constantly communicate with us through their body language, but are we listening? Anna Saillet explains how to tune in to what your pony’s trying to tell you.

To understand your fave pony’s body language, it’s essential to know more about his ancestors. Ponies are social prey animals who evolved to live on open plains. Being a prey animal means it’s essential to communicate clearly, quickly and quietly with their fellow herd members to alert each other to approaching threats, and respond quickly to danger. This means that your pony’s body language is super-advanced, and he will use very subtle ways to communicate with other ponies and you – if you’re listening!

Your pony doesn’t see the world in the same way as you. Whereas you have binocular vision, ponies have monocular vision, which means that they can see almost the whole way around and behind them, with only a small blind spot at their rear and one directly in front of them. Another blind spot, if your horse is standing with a straight head and neck, is directly above his back, where you sit. Because of where his eyes are, your fave pony is also very sensitive to movements diagonally behind him and, as a result, he can be easily startled by motion in this area. He can see clearly over very long distances, too.

Did you know? Ponies have great vision in poor light, but it takes their eyes 20 minutes to adjust from bright light to dark. This is why some ponies refuse to enter dark stables or horse boxes, because they cannot see what’s inside. Imagine how scary it would be if someone expected you simply to walk into what seemed to be a big, black hole!

Your pony can move his ears independently and his hearing is amazing! He can hear lots of sounds that you can’t, which can explain why he spooks at things you didn’t even know were there – he may have heard the high-pitched squeak of a mouse in the hedge, for example. We often assume that our ponies are being naughty without thinking what might have caused that behaviour, simply because our senses aren’t so good.

Your pony uses his sense of smell to find out about other ponies, including their age and gender. This explains why he may want to stop and sniff droppings that you pass out hacking – he’s detecting lots of information about the ponies who passed this way earlier on.

All in the face

Your pony’s face has lots of clues about how he’s feeling, but they’re not always easy to spot – unless you know how. Every pony is an individual and will display tension, anxiety, stress and relaxation in slightly different ways, so you need to become a behaviour expert to spot the signs he’s showing you.

Give it a try! Spend time watching your pony in his field. It’s a great way to get to know his individual expressions and will help you to understand him better.

When a pony is stressed, his upper eyelid often becomes more triangulated or wrinkles may appear above his eye. If you can see the whites of his eye, it could be a sign that he may be frightened. Studying your fave pony’s eyes is an important part of getting to know him, and understanding his expressions and what he is telling you.

This is an important area to watch for any changes. Every pony shows tension and anxiety in a different way, and these feelings can cause your pony to elongate his top lip and change the shape of his chin groove. Some ponies have chins that become quite triangulated when they’re stressed, whereas others become more flattened and wrinkly. If your fave pony’s lower lip is floppy, it usually means he’s relaxed. If his jaw is clenched, it is a sign he is feeling tense and you might even see the muscles on the side of his face become tighter.

These are a good indicator of how your pony is feeling, because there can be a big difference in their shape depending on how relaxed or stressed he is. When he’s aroused, his nostrils will probably become flared, whereas stress or pain will usually cause him to develop more wrinkles around his nostrils.

A pony’s tail shows how he’s feeling. If he’s holding his tail high up, it might be a sign that he’s very alert, and a clamped tail can be a sign of pain. If he swishes his tail a lot, it can mean he’s feeling tense or sore, but he could just be keeping flies away! This is why you need to think about the situation your pony is showing the behaviour in to help you understand what he’s trying to tell you.

Remember! Ponies prefer to avoid arguments, so look for subtle signs like him turning his head away from you when you approach – he will show these before bigger things like walking or running away.

Remember that your pony uses his whole body to communicate with you – his face is just one part of his language. For example, a lowered head and neck might be a sign that he’s in pain, but could also be a sign that he’s relaxed. This is why it’s so important to consider his whole body, his facial expressions and the context of the behaviour to understand what it means.

The Equine Behaviour and Training Association is a reputable organisation that provides information so you can find the right professional to help you with behavioural problems. To find out more, visit ebta.co.uk.