Real-life Drama: The day I fell off!

When Abbey fell off her pony, Pie, and broke her arm it wasn’t to be a straightforward recovery! 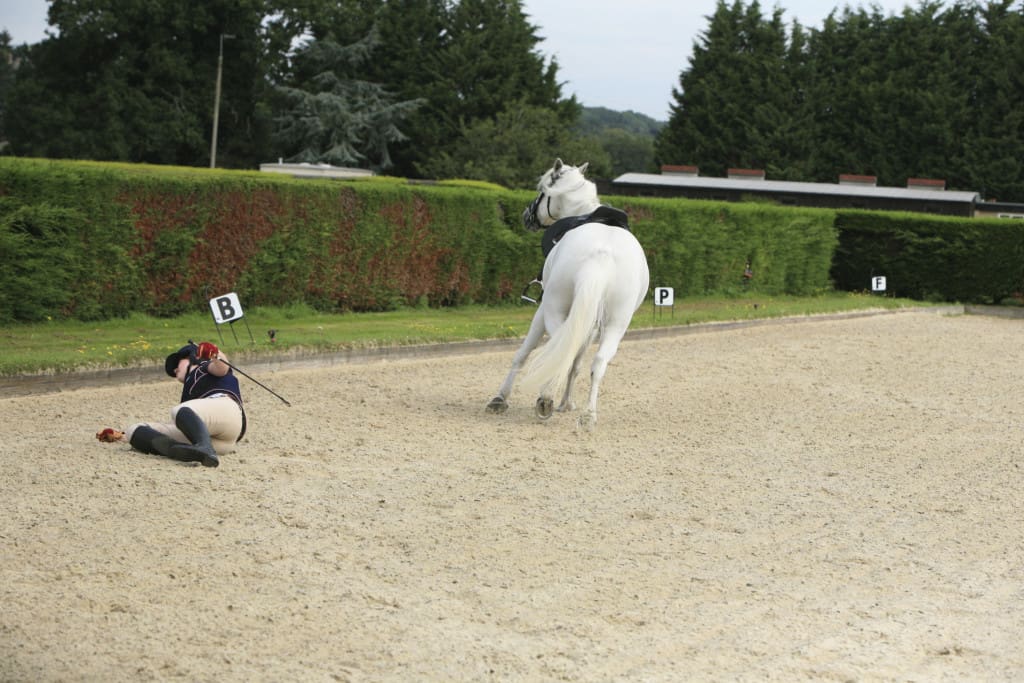 I had just arrived home from school and decided to practise jumping on my pony Pie. I had already set up some jumps which we popped over individually after I’d warmed up. Pie was being really well behaved so I thought I might try jumping them as a whole course.

We jumped the first, second, third and fourth fences, but it was at the fifth that we got into trouble. The problem was that it was a big fence, jumping downhill and towards home – which I hadn’t really thought about before.

After jumping the fifth fence, Pie bolted. I lost my stirrup and tried my best to half-halt him, but Pie had already made his
mind up that he was going home!
As we got to the entrance Pie turned sharply and I fell off. After a few seconds I sat up, slightly in shock. Then my instincts kicked in and I got up to look for Pie. Luckily, he had made his way back to the stables and seeing that he was safe I sat down – still in shock! I was confused and my arm felt really strange.
It was like pins and needles but worse.

I asked my sister to look as I was worried what it might look like under my jumper. She drew back the
sleeve and pulled a face.
My gran came over and said it looked twisted. That’s when I began to panic. My gran took me to hospital but the minor injuries unit there was closed and we were told we’d have to go to Treliske hospital in Truro instead.

When we got there I was sent to have X-rays straight away and when the results came back they confirmed my arm was broken. It was a particularly bad break because
the bone had twisted and chipped.
Then the news got worse – I needed an operation to manipulate the bones back into the right places!

Half-an-hour later I was moved to Thestral ward. It was all a bit weird because I still had my riding gear on and the nurse really struggled to pull my boots off! My operation wasn’t booked in until two o’clock in the morning but it came round quite quickly. The next thing I knew I was waking up in recovery.

My mum and dad were there when I woke up. I felt really ill and the nurse said it was the anaesthetic wearing off. I was allowed to go home and was really looking forward to seeing Pie. He was such a good boy around me but I missed riding so much.

A week later I was back at hospital for another X-ray to check that my arm was healing okay. But… it wasn’t! The bone had moved and the doctor said I’d have to have another operation to put it right again. I hated being in the hospital – it was so boring and the food was horrible. I was so glad to get home
and I couldn’t wait to ride again.

Another week later we were back at the fracture clinic and could not believe it when the X-ray showed that the bones had moved again! I had to go in for ANOTHER operation, but this time they put wires in my arm to prevent the bones from moving again.

When I came round I felt groggy from the anaesthetic. I just wanted it all to end.
The next week, all I wanted to do was ride my pony but I wasn’t allowed to do anything to make sure my arm healed properly this time.
Finally, at the end of the week, we went back to the fracture clinic and to everyone’s huge relief, my arm was mending properly this time. Next though, I had to have the cast taken off and wires taken out.

The doctor said I couldn’t ride for another four weeks and it felt like the time would never come – but finally, I was allowed to ride Pie. He was so well behaved it almost felt like a dream.

I was off for nearly 13 weeks altogether but now I can do eveything I did before. I want to say thanks to all the doctors and nurses, my mum and dad and to my amazing pony Pie for being so well behaved as I got back into my riding again.