Danny Figg was just seven years old when he travelled 120 miles on his pony Peony, following the South Downs Way through Sussex and Hampshire. He started his journey at Eastbourne on August 15 last year, ending up in Winchester 10 days later. Here’s how he did it... 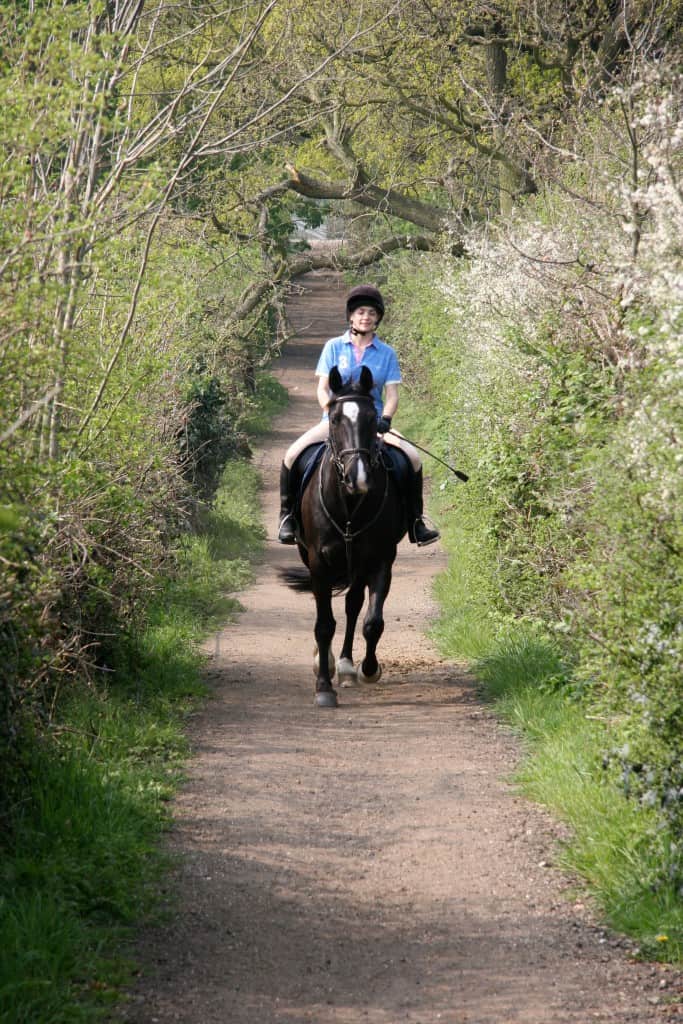 Peony was, too, when we set off, she even tried to gallop across the golf course! We passed through Jevington and saw a pub that claimed to be the birthplace of Banoffee Pie but, unfortunately, it was shut!

We rode across the Downs until we reached a footbridge leading to Alfriston, our first stop. Here we stayed in a B&B, while Peony bedded down next door in a stable belonging to an ex-jockey. Her girth had rubbed a small bald patch on her tummy, so we used a sheepskin sleeve to stop it getting any worse. However, Peony stuck her nose between her forelegs and snorted at it!

The next day of our travels, we met sheep, cows and people flying kites. I think it was the first time Peony had ever met cows, as her eyes nearly popped out of her head! We crossed a brand-new bridge over the A26 that had only been opened a few days earlier, and as we got close to our second overnight stop, we had to go over a railway line.

This involved opening a gate, standing on the railway while we closed it, opening a second gate then closing that – and all done very quickly, as a train was approaching!

But worse than that was the wooden swing bridge we had to negotiate. As Peony stepped on it, the edges crumbled beneath her hooves – we were relieved it was still there when we reached the other side!

Peony spent her second night with some racehorses and we stayed in a pub decorated with stained glass pictures of jockeys’ silks, so I blended in well.

Then the next day, we crossed Balmer Down and Ditchling Beacon where we all enjoyed ice creams, Peony included! After passing the Jack and Jill windmills, we rode down into Clayton where Peony stayed in a very cosy stable, attended by her very own fan club of pony-mad girls! But when we set off next morning, it was hard to drag her away from the ‘pony paparazzi’!

It was a damp start, but the weather soon improved as we approached Fulking Escarpment. Although we had booked into a pub in Upper Beeding, we had no accommodation arranged for Peony, but after much ringing round by Mum, Peony ended up at a local riding stables.

The owners were travelling back from Scotland, but gave us permission to use one of their stables, which was really kind of them.

Next morning, it was sunny as we made our way through Upper Beeding. We stopped for a picnic and I sat in a cornfield. Peony enjoyed her own feast and nearly nibbled my hair along with the corn!

Then we left the open Downs and followed some tracks before reaching Chalconbury Ring, where we stopped for another break, with Peony getting into a tangle with a tree! After rescuing her, we continued on our journey to Washington (not the one in America!), where Peony had a lovely paddock for the night with an inviting bonfire patch to roll in!

Next day, we rode to Amberley where Mum looked after Peony while Dad and I had a pub lunch. When we got going again, Peony tried out a brand-new water trough recently installed on the way.

We rode alongside the River Arun, before climbing uphill and heading for a camping barn at Gumber. We had the whole barn to ourselves and Peony had a paddock, complete with the essential bonfire rolling patch!

Dad cooked up a delicious (well, we had to humour him!) meal of leftovers which he discovered in the kitchen – garlic and coriander rice, cheese and ketchup – which we had to pretend to enjoy!

The next morning, chocolate biscuits and cheap lager were on the menu, but I left my lager for Peony!

We had a leisurely day, but it was fairly showery – although that didn’t stop us enjoying our picnic in the woods at the delightfully named Stickingspit Bottom.

Then we stayed in a fantastic B&B – at Graffham – where I explored some paths leading from the garden into the woods. Peony was also spoilt rotten with some equally good accommodation at a nearby livery yard.

And Mum soaked her aches and pains away in a nice, hot bath, while Dad unpacked the seemingly endless supply of plastic bags that he carried, ‘just in case’!

Next morning, we had a very steep climb back up onto Graffham Down (why are they called ‘downs’ when they always seem to be ‘up’?!) and we passed Cowdray Park Polo Club, where I think Peony quite fancied trying her hoof at an  alternative job!

Later, we passed a lovely field of sunflowers glowing brightly in the sunshine.

After studying the map, we decided to take the most direct route over Beacon Hill, which meant Peony having to jump a drop and zigzag down a very steep hill – great fun!

Then a funny thing happened to us when we reached our next B&B… we were settling Peony into her paddock when one of the dogs there weed all over Dad’s rucksack! But Peony wasn’t standing for that. She stamped a hoof and snorted, sending all the dogs running. The owner called her ‘a little Welsh dragon’!

Next day, we rode through the Queen Elizabeth Country Park, where we stopped at the café and Peony tried some bread pudding, which she loved! We climbed Butser Hill with views of Portsmouth in the distance and as we followed a track over Hyden Hill, we saw a deer.

We were booked into a hostel for the night and Peony was supposed to share a field with some sheep and ducks. But she took an instant dislike to the other animals – and the lack of grass, which wasn’t surprising in August – and galloped around whinnying.

Fortunately, however, there was a livery stables next door, so we tucked her up for the night there and she was much happier. My accommodation was just as comfortable, as I got the top bunk in our room!

Next morning, Peony set off at her usual brisk pace, and we jumped some fallen branches, before passing a field full of newborn calves and riding through a herd of inquisitive bullocks – all very exciting!

Then we followed a diversion and joined up with an old railway line to get us back on route. At the next diversion for riders, we thought it safer to stay on the walkers’ route, but the path got narrower and narrower and we had to cross a tiny footbridge – luckily, though, as Peony is so small, we had no problems.

When we reached Exton, Peony and me forded the River Meon, while Mum and Dad crossed the nearby footbridge. We had a lot further to ride before we finally reached Chilcomb, from where we caught our first glimpse of Winchester. And it was in Chilcomb where Peony stayed in a really posh yard with enormous stables and enormous horses. In fact, she couldn’t see over her door, but was more than happy when the owners kept giving her feeds of pony nuts!

Our B&B was nice and we agreed to dog-sit while the owners went out. But when we let the dog out to go to the loo, it disappeared and refused to come back. So Mum and I spent hours trying to catch the dog, and lure it back in with a trail of titbits we found in the fridge. Eventually, the dog came in of its own accord – typical!

On our final day, we rode into Winchester following a picturesque bridleway, then went round Spitfire Roundabout and over the M3 motorway.

Once we reached Winchester, the ride along the river was really pretty and we reached the Hospital of St Cross where we were presented with the ‘Wayfarer’s Dole’, a traditional meal for weary travellers completing the South Downs Way.

And Peony especially enjoyed her bread and ale! Then it was time for some sightseeing as we explored Winchester and visited the Cathedral, before returning to our B&B in Chilcomb for our final night before the horse transport came to collect us the next morning, and take us home.

What a ride! We enjoyed it so much that we’re planning to do another long ride next. So watch this space…