The DIY stables where I keep my pony, George, were built in Victorian times. It’s an old coach house, built in a square, and George has one of the lovely old cage boxes where the carriage horses lived. 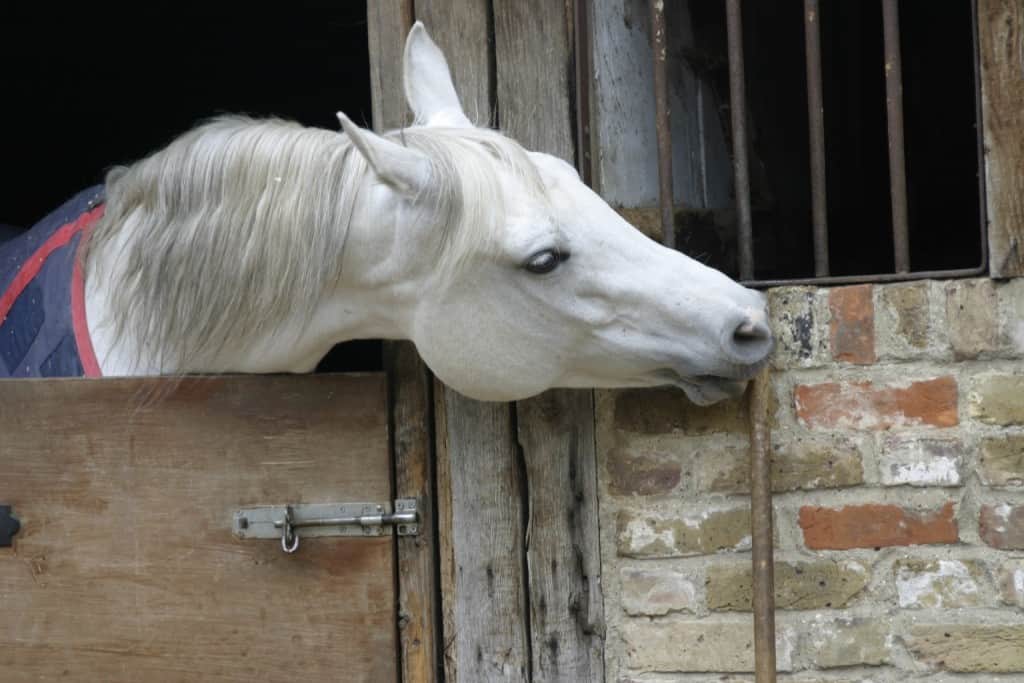 It’s a big, square stable with old herringbone bricks on the floor, an old corner manger (which I don’t use because it’s all cruddy) and a ring in the wall where the old grooms would have tied up the horses to groom them. George can see his best friend Jet in the stable next door. Jet belongs to my friend Hannah, and we spend loads of time together.

One evening, as I was walking across the cobbled yard to George’s stable, a girl called Jess, who I know quite well, rode her pony past me and commented that she didn’t know I had a new horse.

“I haven’t!” I said.
“Who’s that grey in George’s box, then?” asked Jessica, riding out of the yard.

Running into the corridor I looked into George’s stable. It was empty, George was in the field. I thought Jessica had been joking and thought no more of it, especially as Hannah and I were in a hurry to go riding. But then, a couple of days later, someone else asked me why George had started an annoying habit of scraping his hoof on his stable door.

“He’ll ruin his shoes, doing that!” said Poppy, whose pony lived a few stalls along the corridor. “Plus,” she added, “it’s really annoying!”
But George is out in the field!” I told her, rather confused.
“Oh,” said Poppy. “That’s weird. Maybe it was someone else’s pony.”
“But they’re all out,” I said, checking.

SOMETHING IN THE CORNER

Nothing much happened until a few weeks later, when I was grooming George in his stable. I wanted him to move over, and usually he was really obliging about it, but this time he wouldn’t. It was as though he didn’t want to go into the far corner of his stable.

“Come on, silly!” I scolded, giving him a push. “What’s the matter with you?” But George still refused. And then he started staring into that same corner. I wasn’t over bothered until I noticed Jet staring, too. Both ponies had their ears pricked firmly forward, as though they were watching something interesting.

Shivers ran up and down my spine. I put my hand out, but there was nothing there. Eventually, after a minute or two, both ponies let out a sigh and went back to eating their haynets, but a strange feeling stayed with me.

I confided in Hannah. I told her about Jessica seeing a grey horse in George’s stable, and how Poppy had heard a hoof scraping the floor.

“You don’t mean…” began Hannah.
I nodded. “I think George’s stable is, well, haunted!”
Hannah let out a shriek, which scared me more than the thought of equine ghosts.

“It stands to reason,” I said. “These stables are ancient, and there must have been hundreds of horses kept
here over the years. Maybe this horse, this grey horse, doesn’t want to leave.”
“And maybe,” Hannah continued, her eyes wide, “there are horses all over these stables, ghost horses, unwilling to move on, keeping an eye on the horses and ponies living here now, in their stables, their homes!”

I laughed, but I can’t say that Hannah is wrong. I’ve never seen the grey horse that visits George in his stable, but I feel that he does. It’s a bit creepy, but because George and Jet don’t seem bothered by it, I can only believe the ghost – if that is what it is – is friendly.

IT MUST BE TRUE

Sometimes I catch George staring into a corner of his stable, or can see him avoiding part of it, as though he is moving around another horse. Sometimes Jet snorts through the bars between the boxes, his ears pricked. When a new girl walked through the corridor one day she commented on the grey horse in the corner stable – so I think it’s true.

My pony’s stable is haunted!