When Danny outgrew his beloved pony, Peony, he was determined they would still compete together! 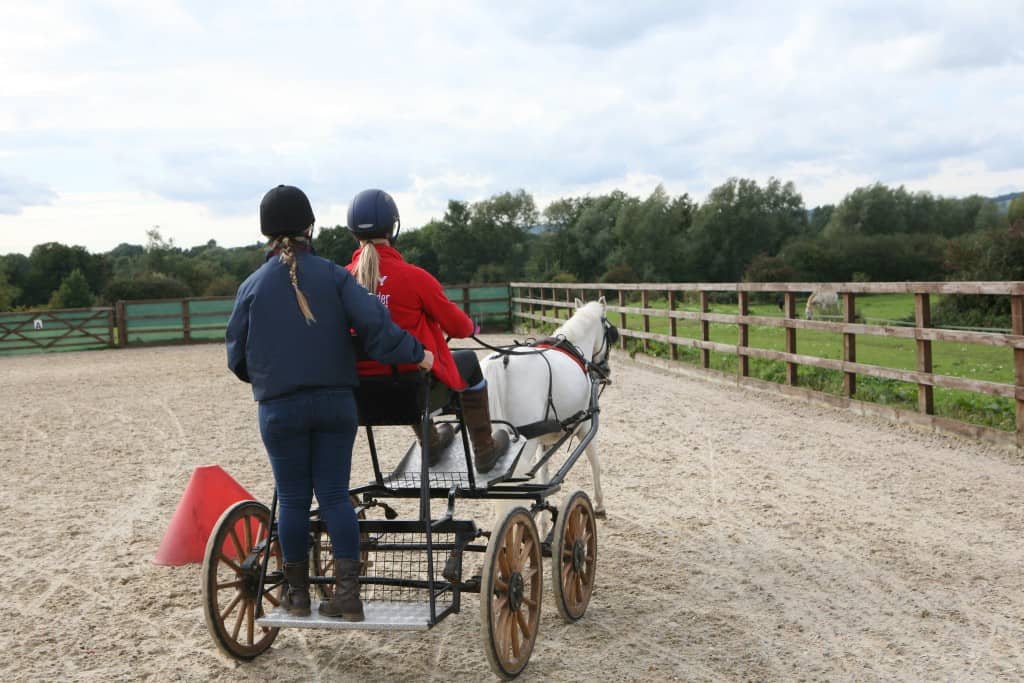 I drive my Welsh Mountain pony Peony, who I used to ride before I outgrew her. My mum and I started breaking her
to drive about a year-and-a-half ago, and began by long reining her. You can also train your pony to pull a tyre, as
this means they get used to the weight and the noise behind them. To start with, to get them used to the noise, you get somebody else to pull the tyre! Now we drive Peony in a two-wheeled exercise vehicle, and are members of Bradbourne Carriage Driving Club.

In at the deep end!

Last year Peony and I entered our first novice driving one-day-event, run by Bradbourne. A driving event is a bit like a riding one so there are three phases, except instead of show jumping you drive through a course of cones, and instead of cross-country you do a marathon. The dressage is in an 80metre x 40metre arena, with the same letters as a long riding arena.

Immediately after you finish your dressage test, you go and do the cones course, where you drive between pairs of cones, called gates. You walk this at the beginning of the day and learn your way round, as you would if you were show jumping. The cones are 145cm apart, but the carriage wheels have to be 125cm apart, so it is quite a tight fi t. The cones are specially made for driving trials, and have no base on the inside, so you can only run over the part you can see. The cones have balls balanced on the top, which fall to the ground if you hit the cones. The cones course is timed, and competitors get penalties every time a ball is knocked off. You also get penalties for exceeding the time allowed. This is a set time and you have to go quite fast to get under it.

In to the marathon

In the afternoon, you take part in the marathon. This is a course of roads, tracks and fields that you drive around, and there is an optimum time to fi nish in. This means you can get penalties for going too fast as well as too slow, like in endurance riding. On the way round the marathon, you tackle obstacles or hazards. The hazards have gaps marked with letters to drive through, and are usually made from wood or plastic fencing. Sometimes they are barrels or trees marked with letters.

The gaps in the marathon obstacles are much further apart than the cones. You have to drive through all the hazards in alphabetical order. The hazards are marked with red and white flags as well as letters, and you have to keep the red ones on your right and the white ones on your left, like in cross-country jumping. The obstacles are timed separately from the rest of the marathon, so the fastest time for these is the best. One of the marathon obstacles at the event we did was diffi cult because we drove in and out of a dried-up pond, but at some events the obstacles have water to drive through.

We were thrilled to come second overall in the novice pony class, and did well not to get eliminated in the marathon, as lots of other people got eliminated for going the wrong way. We will defi nitely be doing more carriage driving events and also driven TREC!