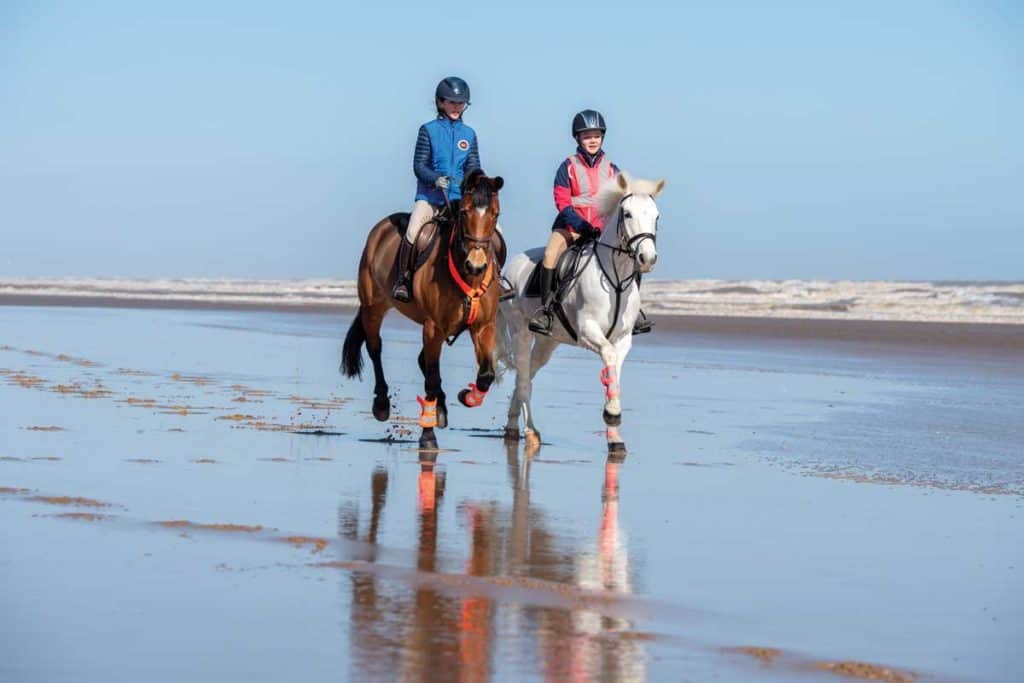 My friends and I had decided to go for a Christmas ride along the beach. It was December 23, the day before Christmas Eve. The weather was perfect – cold and crisp, but still sunny. We’d checked the tide times online, and arranged to meet there for low tide. Dad drove my pony, Penelope, in the trailer. I was a bit nervous because I’d never taken Penelope to the beach before. I knew my two friends, Sasha and Louise, had been though, and they reassured me it would be great fun. Their ponies, Rusty and Trigger, were both sensible, well-mannered geldings, whereas Penelope was a bit unpredictable. She was a good girl to ride, but she didn’t like standing still and could be a bit impatient and pushy. I told myself that once I was in the saddle, it would all be fine.

A lot to take in

When we pulled up in the car park, I noticed the wind had picked up. There was a salty smell and the sound of crashing waves was overwhelming. I thought this would be a bit spooky for Penelope so, when I unloaded and tied her up to the side of the trailer with a haynet, I was surprised how calm she seemed. “Oh,” I said to Dad. “Maybe she’ll be okay after all.” A man walked past with a dog as I went to get my tack from the car. I noticed Penelope prick her ears up at the sound of his feet trudging through the pebbles, but she quickly went back to eating her hay.

I put on my riding gear so I could jump straight on board once Penelope was tacked up. Then I popped on her brushing boots, numnah and saddle. Finally, I put the reins over her neck and undid her headcollar. Penelope stepped away from me, but I wasn’t worried because she always did this before letting me put her bridle on. This time, though, she lifted her head up so I couldn’t reach. It was like she’d suddenly realised she was somewhere new. “Come here, Penelope,” I said reassuringly, as she carried on walking. I pulled on the reins around her neck but it didn’t do anything to stop her.

Penelope got faster and faster until she broke into a trot. Her bridle was still in my hand, so I began to run beside her, racking my brain for ways to stop her. “Stop, Penelope. Stop!” I pleaded, feeling completely powerless. She burst into a canter, making me run as fast as my legs could carry me to keep up with her. All I kept thinking was that I couldn’t let go, but Penelope was speeding up even more, forcing me to admit defeat. I let go and fell to my knees, watching my beloved pony gallop off into the distance, still wearing her saddle and with her bridle now dangling beside her. Looking back, I realised how far up the beach we’d come, and the trailer wasn’t in sight any more. In my panic, I carried on running up the beach after her. I knew there was a fence at the end of this stretch of sand, and I hoped she couldn’t go any further and would be waiting there for me.

As I was running, someone called to me from a car. I looked up at the road and saw that it was Sasha’s mum, Mandy. She’d come to watch and take photos of our ride, but was now beckoning me to get into her car. The minute I saw her I burst into tears. “Don’t worry, Rosie,” she said. “We’ll find her.” Mandy drove us to where the fence line ended. We looked around, but Penelope was nowhere to be seen. “I can’t believe this,” I wailed. We drove back to the trailers, where I found out that my dad and Sasha’s dad had driven out to look for Penelope as well. Sasha and Louise came over and hugged me, telling me everything was going to be okay. Rusty and Trigger seemed oblivious to the situation, still munching away on their hay. I told my friends how bad I felt for ruining the ride, but they said finding Penelope was much more important. We waited anxiously for 10 minutes before Mandy got a call from Dad. They’d found Penelope!

We jumped into Mandy’s car and headed to where Dad and Penelope were, while Louise’s Mum waited with the others. My heart felt like it wanted to burst when I glimpsed a view of Penelope as we pulled up. I leapt straight out of the car, ran over to her and threw my arms around her neck in an enormous hug. Dad was always calm in a crisis and had taken Penelope’s headcollar and leadrope with him, so he now held her while she nibbled on some grass.

It turned out Penelope had spotted a gap in the fence and had carried on even further up the beach. Dad explained that he and Sasha’s dad had seen her from the car and, by then, she’d slowed back to a trot. Sasha’s dad had been able to attract her attention by calling her and shaking a bucket of pony nuts, then Dad managed to slip the the headcollar over her nose while she was eating. I was so grateful she’d been rescued that I burst into tears all over again.

Thankfully, Penelope came away from her escape unharmed. For Christmas, I got a new headcollar that unclips at the nose, so now I can put her bridle on over the top before slipping the headcollar off. My friends and I rescheduled our beach ride, and while tacking up was nerve racking, the new headcollar did its job and Penelope stayed with me this time. I’ll never forget the amazing feeling of cantering beside the waves with my friends. I can’t wait to go again before the end of the Christmas hols!