Polly works hard at the local yard where her fave pony, Dasher, lives, only to have her life made miserable by its stern owner, Angie. When things take a turn and Polly’s future with Dasher is in danger, she’s heartbroken. Will she be able to keep Dasher in her life? 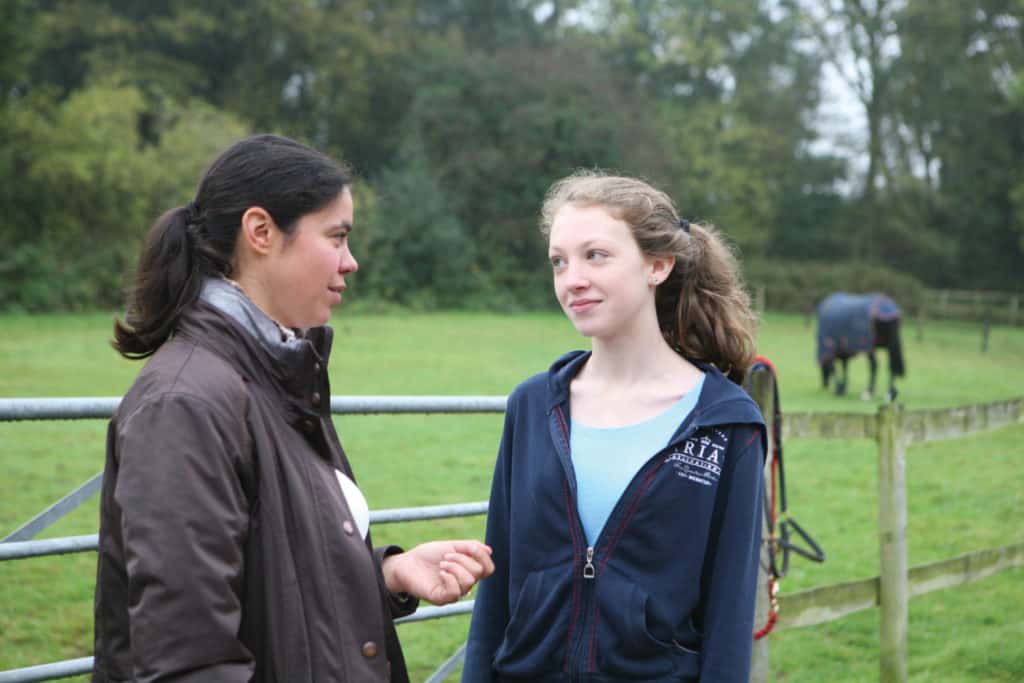 I pushed the broom across the yard as quickly as I could. I glanced at the clock on the wall on the outside of the stables – 3.56pm. Angie had given me strict instructions that the whole yard must be spotless by 4pm, sharp. A flash of panic rushed through me – I still had half the yard to sweep. I swept at double speed until my hands were sore, my arms ached and my forehead was clammy. Just as the clock hit 4pm, I swept up the last strand of hay. A few seconds later, I heard the faint clip-clop of hooves coming up the driveway.  Right on time. Angie rode onto the yard on her big warmblood mare, Nahla. “I thought I told you to have this swept by four o’clock?” Angie barked, gesturing toward the yard. My face dropped. “It is swept,” I said gingerly.

“It doesn’t look like it to me,” Angie glared and nodded her head towards a patch of yard behind me. I spun round to see one of the cute livery ponies, Sooty, with his head hanging over his stable door, munching on a mouthful of hay. A few strands dangled from his mouth, then escaped and floated down onto the freshly-swept concrete to join a few other strands. “One simple job I asked you to do, Polly,” she snarled, “you can think again about riding Dasher today seeing as you can’t even be bothered to keep the yard tidy”.

Before I could gather my thoughts enough to stand up for myself, Angie had dismounted and set of across the yard. I stood in disbelief for a second before I realised what had happened wasn’t unbelievable at all. I wandered over to Dasher’s stable, leant on his stable door and sighed. He poked his piebald head over and nuzzled my face.

Seven or eight months ago something like this would’ve brought me to tears – now, I was used to Angie’s cruel remarks and her cancelling my rides. For all the months I’d been a weekend groom at Blythe Park, I’d ridden maybe 10 times. I worked as hard as I could every Saturday and Sunday in the hope of a ride on my dream pony, Dasher. Sometimes I wished that another riding school or livery yard would pop up in the area so I could go and work there instead but, then again, Dasher wouldn’t be there.

Later, as I cycled home, I checked my watch – the digital blue numbers told me it was almost 8.30pm. I knew I’d probably missed dinner. I rushed into the house, “I’m back!” I announced. “There you are!” Mum said with a look of relief. “I was starting to worry. How was your ride? Was Dasher good?” Mum asked. She knew how much I adored Dasher. “Oh, yeah, he was fab!” I lied. I knew Mum would be furious if she knew that I did all the yard work for next to no rides.

I grabbed a snack and rushed upstairs to my room before Mum asked any more questions I’d be forced to give a fake answer to. I slumped on my bed and texted my best friend, Beth, to tell her how much of a witch Angie had been. Almost immediately, my phone bleeped with Beth’s reply: OMG!! She’s the worst! You should give up at Blythe Park, Poll.

As I read her message, part of me knew she was right. Angie made me miserable, but I couldn’t bear to leave the ponies – especially Dasher.

I woke early on Sunday morning and hurried to the yard. When I arrived, I could see two people walking across the fields. ‘Strange,’ I thought. I was usually the first person on the yard at the weekends. I began sorting out morning feeds for the ponies and, just as I was chopping up some apples, I heard a high-pitched voice behind me. “It’s you.” I spun round to come face-to-face with Arabella, one of Angie’s snooty nieces. Her twin, Catherine, came strolling into the feed room after her.

“Still here, then?” Catherine smirked. I’d met the twins only twice before and both times they’d been as awful to me as I’d expect considering they were related to Angie. “Yes,” I said. Just as I was about to push past them with the feeds, Angie appeared in the doorway. “Hi, girls, have you thought any more about which ponies you’d like?” Angie said, ignoring me and speaking only to the twins.

“Not yet,” Catherine mumbled. “I’ve got an idea of who I might like,” Arabella said, confidently. “You see, Polly,” Angie turned to face me. “The girls want ponies of their own and, as I’ve got a few more here than I need, I’ve said they can choose one each to take home with them.”

My tummy did a flip. The girls would be taking two of the ponies! I stared at Angie in disbelief. I felt Arabella looking at me, then she said: “Actually, Auntie, I have decided who I want. I think I’ll take Dasher.” Panic flooded through me. “No!” I exclaimed, “you can’t!”

“Of course she can,” retorted Angie. “He’s yours, Arabella. You can take him next weekend.” Anger began to well up inside me. “You know I love Dasher!” I turned to face Arabella. “You can have any of the other ponies!”

“I don’t know why you’re so upset, Polly,” Arabella smirked again. “It’s not like he’s your pony. He’s mine now.” And with that, she turned on her heel and marched out of the feed room. I was in shock. I couldn’t focus on anything, so I left the yard straightaway and cycled home as fast as I could. As soon as I ran through the front door, Mum knew something terrible had happened. “Polly! What’s happened?” Mum questioned me straight away.

“Angie’s letting Dasher go!” I wailed. Even though Mum wasn’t horsey, she’d happily listened to me chatter on about how amazing Dasher was and how much I loved him, so she knew my despair was justified. “Oh no,” Mum said as she hugged me. “She’s giving him to one of her awful nieces! I’ll never see him again!” I sobbed.

Days passed and nothing helped lift my mood. Beth tried to cheer me up with a movie marathon and a tub of ice cream, but even that didn’t help. All I could think about was how I longed for Dasher to stay or, better still, be my pony.

Friday morning dawned – Dasher would be going to his new home tomorrow. I couldn’t bear to go and say goodbye so as soon as I got home from school I shut myself in my bedroom and scrolled through my phone, looking at all the cute pictures and videos I’d taken of him.

About an hour later, Mum knocked on the door. “Can I come in?” She asked. “I suppose,” I mumbled back, gloomily. “I’ve been talking to your father…” Mum started. ‘Here we go’, I thought. Every time a sentence started with that it usually meant I was in trouble. “… and we’ve decided that we’d like to try and buy Dasher for you.” Mum continued. I stared at her, trying to process what she’d said.

“But… what? …but…” I couldn’t speak. Mum smiled. “You work so hard at that yard and I know how much you love Dasher. Beth told me how harsh Angie is on you – I had no idea she was so bad. You’ve done well to stick it out for the sake of spending time with the ponies. You must really love Dasher.”

“I do! He’s awesome!” I started to realise what Mum was saying. There was hope for my dream of owning Dasher! “You can keep him at your uncle’s farm in the village. There aren’t any horses there but plenty of sheep to keep him company. What do you think?” Mum looked at me, hopefully.

“This is assuming Angie will sell Dasher to us, of course.” Mum added. “Don’t get too excited yet.”

Early the next morning, I waited at home anxiously, while Mum and Dad went to Blythe Park to negotiate with Angie. I was dreading them coming back and saying it was a no – there was no way she’d pick me over one of her nieces. I paced around the kitchen for ages, thinking over every possible scenario in my head until, finally, I saw Mum and Dad’s car pull up in the drive. Butterflies swooshed around in my tummy.

They got out and walked up to the house, deep in conversation. They didn’t look happy. My heart dropped. I knew it – Angie had said no. But as Mum passed the kitchen window, she looked in at me and gave a huge smile and a thumbs-up. My heart leapt and questions whirred in my head. Had Angie said yes? Was Dasher mine? Mum grinned as she walked through the door. “You better kiss your birthday and Christmas money goodbye for the next few years, you’ve got a pony to feed!” she said, smiling. “It turns out the twins’ parents said no to them having ponies,” Mum continued.

I couldn’t contain my excitement. I screamed and cried and jumped around the kitchen. Dasher was mine!