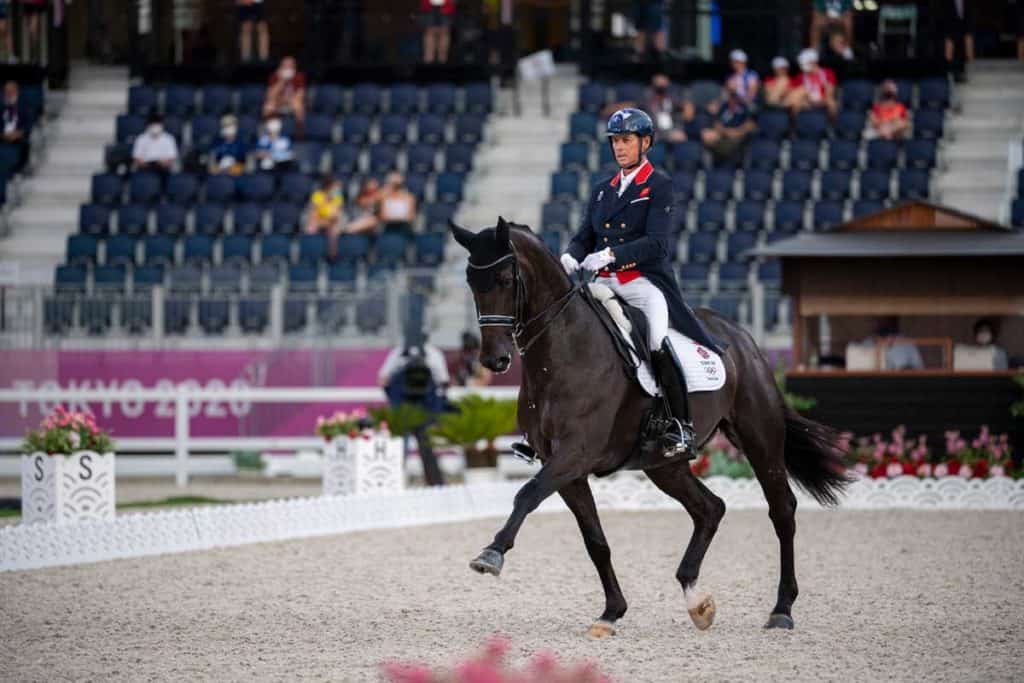 Today’s (Tuesday 27 July) thrilling competition saw Germany take the gold medal with a whopping 8,178 points, the USA silver with 7,747 and Great Britain bronze on 7,723 points. With the day’s events split into three sections, with a rider from each of the eight qualified nations per round, what the test might have lacked in technicality it more than made up for by being physically tough. Under the evening’s grand prix floodlights, athletes were certainly given a run for their money.

The first round tests got underway and making his mark for Great Britain came Carl Hester who, in his sixth Olympic Games, put together a fantastic display with En Vogue, made up of seamless transitions, incredible movement – and some flawless tempis, which would have been a relief after a slight mishap in the previous test. Scoring an incredible 78.344%, commentators commended Carl’s for his ability to allow a horse to be free in front and reaching forward into the contact. A former ride of Charlotte Dujardin, Carl took over the reins last year and, despite the small window the pair have had to prepare, his chemistry with the 12-year-old meant the pair looked totally in sync from start to finish.

Germany’s Dorothee Schneider with 16-year-old Showtime FRH followed, making the nation’s gold medal ambitions clear, scoring 80.607% to beat Carl by barely 2%. Meanwhile, Adrienne Lyle and Salvino of the USA scored 76.109% to get their team off to an excellent start, too.

In the next round for Great Britain came Holland-based Lottie Fry and the powerful Everdale. A huge achievement for the 25-year-old’s first Olympics – made especially impressive given Lottie was U25 European Champion just two years ago – she scored 76.854%, holding Everdale together effortlessly for an expressive test. The stallion’s dramatic movement and presence make him a real viewer favourite and, save for a corrected wrong leg that would’ve cost him a few marks, the combination certainly held their own in a world-class field.

As predicted, USA and Germany continued to offer up stiff competition through this round, too. Steffen Peters and the impressive Suppenkasper scored 77.766%, before the German legend Isabell Werth rounded up group two, scoring a whopping 83.298% with the stunning Bella Rose, who looked picture-perfect in the ring.

Into the final round and all eyes were on double individual gold medallist Charlotte Dujardin and the powerful pocket rocket Gio, whose partnership with Charlotte has been a long time in the making despite being just 10 years old. The pair performed a test that only proved their potential for a score of 79.5% – there are certainly great things to come for this fantastic little horse.

Unfortunately, the combined scores weren’t quite enough to clinch the silver medal Team GB was all but lined up for, after the USA’s Sabine Schut-Kery and 16-year-old stallion Sanceo exceeded all expectations to score a whopping 81.595% – a combination that’s been together over a decade – seeing the nation duly rewarded with the silver medal spot on the podium.

Wrapping up proceedings for the day and drawing the team finals to a close, Jessica von Bredown-Werndl and TSF Dalera scored 84.666% – an extraordinary feat that cemented Germany’s well-deserved gold medal. A team made up of the world numbers one, two and four, it came as no surprise that the polished performances were plenty to secure their place at the top.

Tomorrow will see the athletes take on the individual competition. 60 riders went head-to-head over the weekend to qualify, and the 18 combinations going through to tomorrow will be…