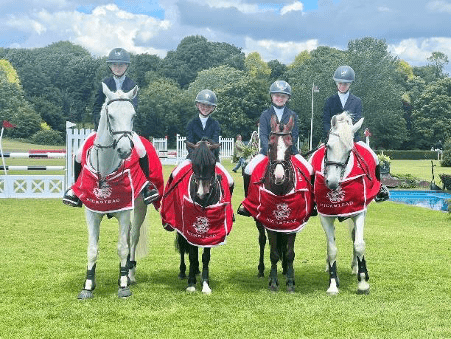 The awesome team, made up of Darcy and her pony Caeroin Mor Lad, Daisy with Woodwards Winny, Orla with Little Ceasar, and Mia with Cocklebury Bucaneer, rode to victory on Friday 1 July 2022 at the prestigious Hickstead showground.

The historic National Schools Jumping Championship has been running since 1960 and is the class that everyone wants to win.

It was an extra special win for Darcy and Daisy who are in their last year at Cottesmore, so won’t have the opportunity to compete for their school next year. But it’s not only the older girls who had a memorable ride, Mia, the youngest member of the team, put in an incredible performance competing against students five years older than herself. And Orla managed to pick up third place in the individual showjumping, as well as the team win, after a fantastic round with Little Ceaser.

“We’re jumping for joy at this marvellous news,” said Cottesmore School Headteacher, Tom Rogerson, “and we’re so proud of the dedication shown by these four brilliant pupils.”

Would you like to find out more about setting up an equestrian team at your school? Why not check out the National Schools Equestrian Association at nsea.org.uk for some more info.