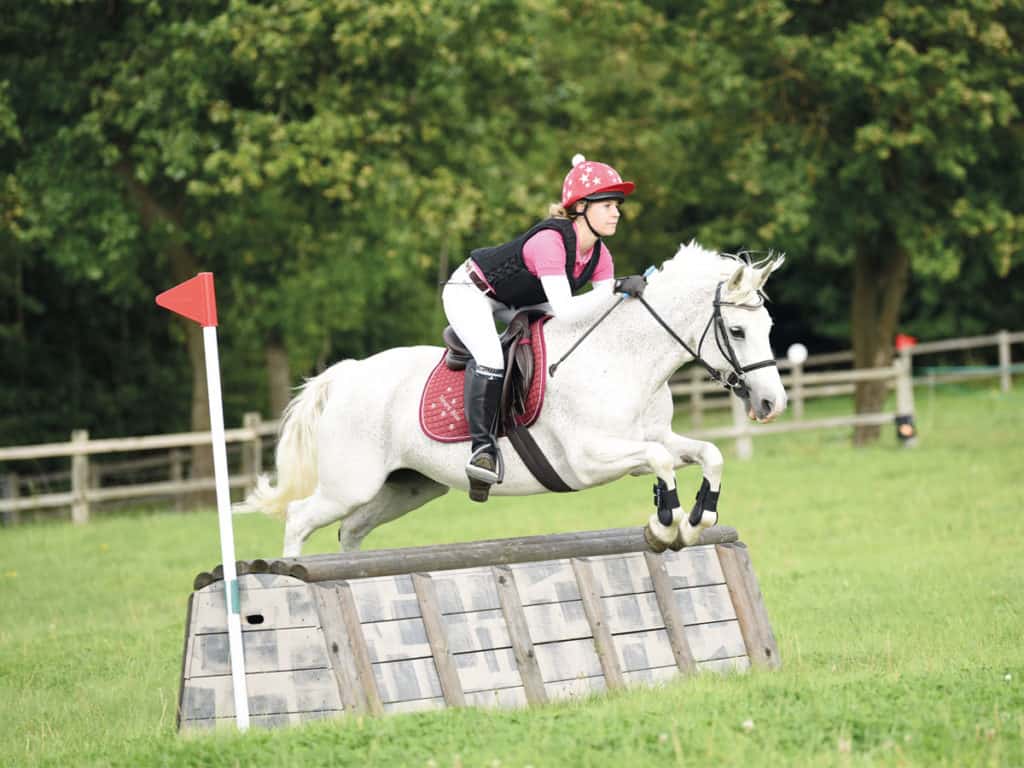 Not much beats the thrill of cross-country! It’s super-fun for you and your pony, and makes a change from your normal riding in the arena.

Cross-country schooling is the best way to prepare before you go out competing, and gives you the chance to practise over all the different types of fences you’ll meet.

Inviting fences are the best type to start with, whether you’re warming up are less experienced. They include logs, roll-tops and tyres. Their rounded shape means they’re inviting for your pony to jump as they’re not too spooky or wide.

You need an XC canter with plenty of impulsion but isn’t too fast. Keep your leg on, look over the fence and soon you’ll be flying over without a fuss!

Although brush fences often look big, they’re inviting for ponies and jump well. The top section is made from hedge-like material that ponies are able to brush through with their legs, so they don’t have to jump the full height of the fence.

A forward canter with plenty of impulsion – but not speed – is best. Wrap your legs around your pony’s sides as he might take a big leap over if he’s not seen a brush before!

Skinny fences are narrower than usual, meaning they’ll really put your straightness to the test! They can come in lots of different forms, from logs to arrowheads.

Plan an accurate, straight line to the fence and stick to it. Maintain an even contact and keep both your legs on to push your pony straight – imagine that you’re pushing him down a channel towards the fence.

Cross-country fences come in lots of different of shapes and sizes, and some of them look much spookier than others. These can be brightly coloured, a funny shape, under a tree or coming out of the woods so the light and shade affects how your pony sees them.

The main thing you need to remember is not to look down at the fence! It’s often the rider who makes a pony worried, rather than the fence itself. Wrap your legs around your pony’s sides to encourage him forward, but keep a good contact to make sure you’re not going too fast. Look up and over the fence and you’ll jump it with no problem.

Steps down involve your pony jumping down from higher to lower ground. They can be individual or a staircase, where you’ll ride through several steps in a row.

Steps can be approached in walk, trot or canter – so if you or your pony are unsure, start slow. Look ahead, rather than down as you approach and roll your shoulders back to keep your body upright in the saddle. Push your heels down to maintain a strong leg position and, as you jump down, let the reins slide through your fingers so you don’t catch your pony in the mouth.

Practise gathering up your reins smoothly after you’ve let them slip for a step. At a competition, another fence might be positioned soon after to test your skills!

Corners are a more technical type of fence, which are narrower at one end and wider at the other.

Imagine a line cutting the corner through the middle – this is the line you’ll aim to jump straight over. The front of the fence will be slightly angled on your approach, so focus on maintaining a balanced, straight line and your pony should jump with no problems. It’s best to hold your whip in the hand on the narrower side of the fence to help keep you straight and prevent a run-out.

A ditch fence is just that – a ditch! They often have wooden planks on either side so you can easily see how wide it is. As you go up the levels you’ll come across wider and deeper ditches, but put the foundations in to jump confidently over small ones first.

Start in walk. Keep your eyes up and reassure him with your leg that it’s nothing to worry about, and he should pop straight over. Build up to approaching in trot and canter when you’re both confident, but remember to keep your leg on and hands soft to encourage him to jump. Don’t look down into the ditch or your pony’s likely to look at it, too.

Some ponies love to put in a huge jump over ditches, so be prepared to go with him if he takes a leap!

Ponies can’t tell how deep water is by looking at it, so they need to trust you that it’s safe for them to go through! A water fence might involve just riding through it, but as you move up the levels you might be asked to jump in or out.

Look over the water to the other side, rather than down into it, as you approach. Push your pony on with your legs to encourage him in, and ride confidently through the middle.

If there’s a step to jump up out of the water, keep a soft contact and go into your jumping position as your pony jumps up.

Click here to watch our super-cool video of these fences being tackled!